Today is one of those days walking around the neighborhood that I’m acutely aware of microclimates and how much they influence gardening in SF – and California in general. It’s one of those days where I left my house cold and bundled up, and within two blocks I had to remove my hat and hoodie, and was wishing I’d worn shorts. Around here we all hear about microclimates all the time. It amuses my dad (who lives in the Florida Panhandle, and is used to weather reports that have a uniform regional prediction for multiple states) that our weather reports here cover city by city, and even by neighborhood within SF. But it’s true!

Just what are microclimates, and why are we so special, huh? Well, lemme talk about the famous SF fog. To start, the sun warms the top layer of the Pacific, causing evaporation. The centrifugal force of the Earth’s spinning causes cold Alaskan waters to flow like a wide river down the West Coast of the continent. (This process is called the Coriolis Effect.) As the inland Central Valley heats up, the hot air rises. This sucks in air from the West, drawing the warm, moist air from the open ocean across the cool California Current. Voila, you have fog. SF just happens to be the big gap in the Coast Ranges, so we get it farther inland than the rest, but the northern fog belt (and thus, redwood territory) stretches inward about 35 miles.

Back to SF. The western facing slopes get the brunt of the wind and fog, the eastern sides are sheltered. Then you’ve got northern- and southern-facing slopes. You have gaps in hills that let fingers of fog stretch over certain neighborhoods and skip others. You have the wind tunnels through the gaps, too. Don’t forget about elevation, and proximity to the beach or the bay. These all create many, many, many microclimates. Here, you likely have two or more to contend with in your own garden, for that matter! The microclimates have become a sort of source of pride for SF folks, and in many cases help define a neighborhood. (We all know of the foggy Sunset, windy Alemany Corridor, and sunny Dogpatch, for example.)

Within the neighborhoods, too, there’s another interesting factor: blocks. Each block is a wall-to-wall fortress of houses. Often, architectural details overlap or are even attached to your neighbor’s house. 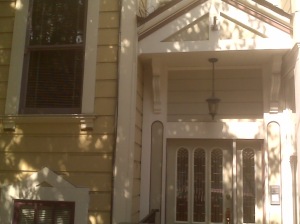 Within these blocks are enclosed gardens, all visible only to the neighbors. Many can’t be seen from outside the homes at all. Sometimes you can catch a magical glimpse through an open garage door, or through an open window. Sometimes there’s a gap in the houses somewhere. 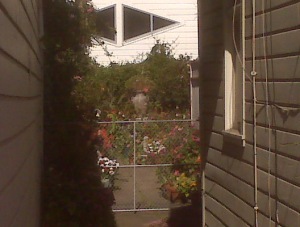 I love these little peeks into spaces. I must say, Google Earth has been kinda cracky, too, thanks to satellite imagery of gardens! I love being able to mouse-over a spot and see its elevations, too, but I digress… These individual blocks, regardless of their orientation (Northern exposure, for example), also have their own microclimates that will vary from block to block. They are islands of habitat influenced by orientation and elevation, but also influenced by what has been planted around the whole inner block and even by the colors of the backs of the houses! Backs of houses here are painted independently of the fronts, usually. Lots of white and pale colors in back to bounce more light around the gardens – especially darker gardens. Our own is dark red in back, and holds heat better given that it’s south-facing on our Northern exposure hillside.

Planting for these microclimates can be a challenge, to be sure. What works on one side of a house may not work on the other! If we look, we can all find an example of a corner house with the same trees planted along both streetsides. It’s common that one street will be beautiful (sheltered north-south street) and the other will be ratty and battered (east-west orientation). Even within a yard, placement can be key. My own garden is sheltered. Northern exposure, uphill to the West and East. But when my western neighbor took out her old 40′ avocado tree last year, wind suddenly became a factor for me. (Glad to be done with the millions of avo flowers blowing in drifts through my garden, though!) Does that mean I needed to start swapping out for all wind-tolerant plants now? No! I just needed one wind-tolerant plant to re-create that buffer I once had.

It really does come down to site placement when you have all these conditions to deal with. Knowing what happens in your own microclimate is key to the success of your plants. With proper site conditioning (soil amendment, dealing with drainage issues, terracing steep slopes…) you can overcome certain issues, but planting can also manipulate your microclimate.

This entry was posted in Horticulture and tagged climate, fog, gardening, microclimate. Bookmark the permalink.

3 responses to “on Microclimates…”