A couple weeks ago I posted about my recent ventures into floristry, via a CCSF class in Ikebana. I’m just a beginner at this myself, but am enjoying sharing the basics, Ikebana for Beginners, as it were. I’m sure there’s not one single other blog on the planet offering this same guidance. 🙂

In the first post, I had finished a trio of lessons on the basic upright style of Moribana, the type of arrangements made in Suiban, a shallow dish of water. The most basic and popular. As we go along, I’ll continue to post in similar groupings. Today, I go into the basic upright Nageire style, having just finished the trio of lessons. Besides just the lessons, students are to practice as much as possible on our own, to refine and better grasp the feel of how to use the plant materials.

Nageire is the style utilizing Tsutsu, a tall cylindrical vase. Each series of lessons focuses on building upon the background learned from previous lessons. In our previous, we learned of Shushi, the three main elements of the arrangement, comprised of Shin, Soe, and Hikae. In Nageire we will be using the same representations of heaven, man, and earth to form the framework.

(Check out the previous post if you want to read along in succession.)

Whereas Moribana relies on Kenzans (floristry frogs) to hold everything in place, Nageire is supported by a scaffold built from a single stick, Soegi, being allowed to touch the bottom of the vase. Every other piece is fitted into Soegi and/or each other, touching only the sides and never the bottom. Building a Nageire arrangement with Soegi is called Soegi–dome. In upcoming lessons we’ll be transitioning from basic upright into basic slanting styles, and will be learning to use a different scaffolding called Jumonji (Jumonji–dome when you’re utilizing Jumonji pieces.) This one uses little crossbars of sticks wedged into the mouth of a vase instead of a single vertical brace, but we’ll get to that when the time comes. In practice, a good Ikebana master will use the two interchangeably and intuitively, depending on the feel of the materials to be used. It’s all about using what tools are at your disposal. First, we must learn Soegi–dome.

Nageire is the most traditional of Ikebana, and predates Moribana by literally centuries. Moribana came into use just about a century ago, in response to Westernization of Japanese culture. Traditionally, Suiban were for floating arrangements, and Kenzans were not really in the Japanese vocabulary until around 1900.

So, here we go! First step is to pick your Tsutsu. It should be “weighty” to support the arrangement, sturdy, and fit the colors of your plant materials. Black or white Tsutsu are “invisible” to the arrangement, and support rather than detract from the colors, so you can use either one safely as a basic – especially black. You can also use clear glass, but you’d want to line it with matching leaves from your arrangement to hide Soegi and the ends of your other components.

Soegi is just a pinch shorter than Tsutsu.

Tsutsu at hand, and filled to within a half inch with cool water, pick out a stick for Soegi. You want Soegi to be as straight as you can find, free of knots as much as possible, and about as thick as a Sharpie pen, ideally. Just while I’m thinking about it, I think I forgot to mention before that all cuts in Ikebana are always done under water. A bowl of water at hand is where every cut should take place. Soegi should be about a half inch shorter than Tsutsu, and the water should just barely cover the top of it. Cut both ends flat across, no angle.

You want Soegi knot-free because you’ve gotta split it. Lengthwise. Right down the center. Four to six inches long. Drop Soegi into your Tsutsu before you split it. It should touch the bottom on its own. If it floats up above the rim, you’ve got a dud and need to choose a different material that’s denser. A floater is too dead of a wood and will not split properly. No floaters allowed. When you’ve got the right piece, split it and drop it in, split side up.

As with Moribana, you begin with Shin, followed by Soe then Hikae. Because of the logistics of the vase, though, you often have to place Jushi before placing your focal point in the center of the triangle, otherwise you dislodge your work. Sometimes, but not always. It’s all about feeling out your materials.

So, in comes Shin. As before, you measure Shin‘s size by taking the size of your container (size is height plus width), and adding about half again. Again, this is not a literal measurement. It’s about feeling out the materials. Use the “mass” of Shin to determine where to measure from, not necessarily the literal farthest point of the branch. If you’ve got a leafy branch with a bare twig extending an extra foot from the end, don’t count the bare twig, for example. In Nageire, you need a bit of extra length on all three Shushi, vs in Moribana. You also need to account for a bit extra for inside your vase, in other words.

Look at the branch you’ve chosen for Shin. A subtle curve is nice. You want that curve to face into the arrangement. You want it to be curving toward you, framing a space. If it curves to the outside, as gravity will make it do if you just stick it in there and let go, it’s no longer framing the piece, but rather is directing your eye away from the focus. Sad arrangement. No sad arrangements. You want to cut Shin with a 45 degree angle, such that the cut will fit flat against the inside of your vase when the piece is actually facing the direction you want it to. If the cut is not right, Shin will want to swing off one way or another until that flat cut meets the wall.

Shin needs to be split, too. You want to be sure to split right up the center of the face of your angled cut. Split about four inches. Now, you’re gonna interlock the split end of Shin with the split end of Soegi. You’re now getting some Soegi–dome on. Soegi will touch the bottom center, Shin will touch the rim and the inside wall, and should basically face the way you intended. Adding Soe will create the final triangulations to hold it all in place.

You want to take all the exact same steps and considerations with choosing and cutting Soe as you did with Shin and want it to be about 3/4 the length of Shin, as we learned before. Soe‘s split can interlock with Soegi or with Shin, whichever is necessary to help everything line up. Soe will touch the rim and the inside wall flatly, like Shin does. Wedge everybody around as needed until you get the basic format of Shin leaning about 15 degrees off vertical and to the front, and Soe doing both of the same at about 45 degrees. At this point, the two uprights will be able to stay right where you want them with no helping hands, assuming proper fitting.

Now, you can choose and cut Hikae. Hikae will be a different plant than your first two elements, like with our previous lesson. You’ll want to cut the same general length as we’ve learned – 3/4 that of Soe, plus enough for inside the vase – and the same 45 degree angle that will fit flat against the inside wall when your piece is facing how you want it. This time, there’s no need to give it split ends. Your scaffold has been built already, now you can use it to support Hikae and Jushi. You should be able to just “slip” Hikae in there, poke the end through the scaffold somewhere and have it stay put, at the requisite 75 degree angle of tilt and yaw. Poke it all around until you find the sweet spot that makes it stay where you want it. There’s not a scientific spot where it’ll fit. You just gotta poke it till it feels right.

Now that the Shushi are in place, you can put in the Jushi and focal point, as we learned in the earlier lesson. The focus should be centered in your triangle, usually the same material as Hikae, and the Jushi are there to augment the arrangement and to hide the front lip of Tsutsu. They only need to touch the water and stay in place, so there is great freedom in how to insert them. The back half of the rim should be free and clear of any materials touching it, with everything leaning to the front half. 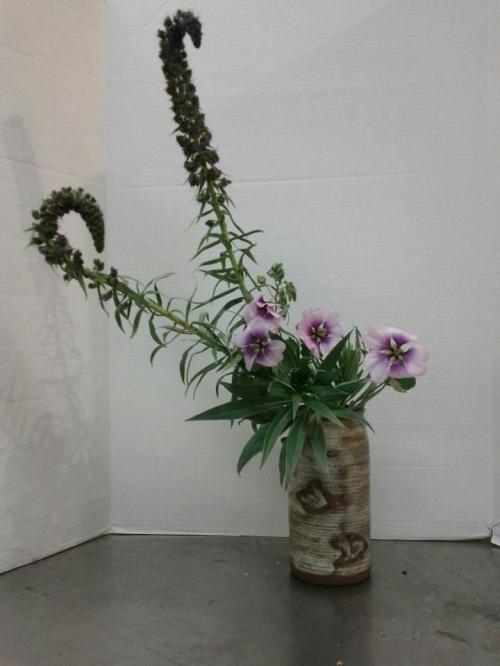 In my first one, I chose some Echium early in the day that didn’t stay as erect as when I’d cut it. Had to wire it to keep its curl! 🙂 Paired it with Lavatera. 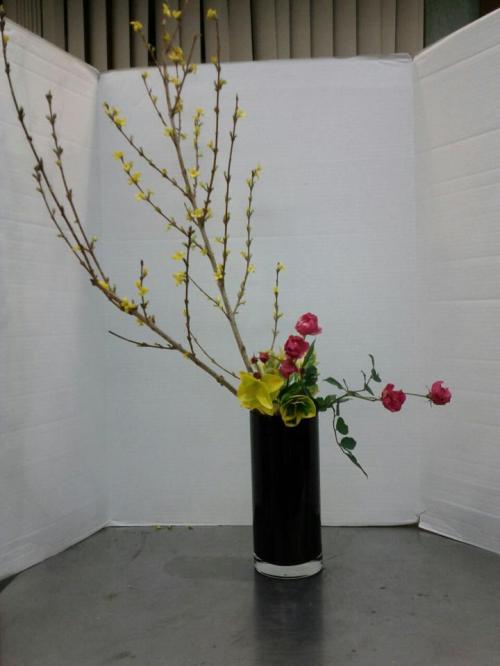 This one took Forsythia and roses. 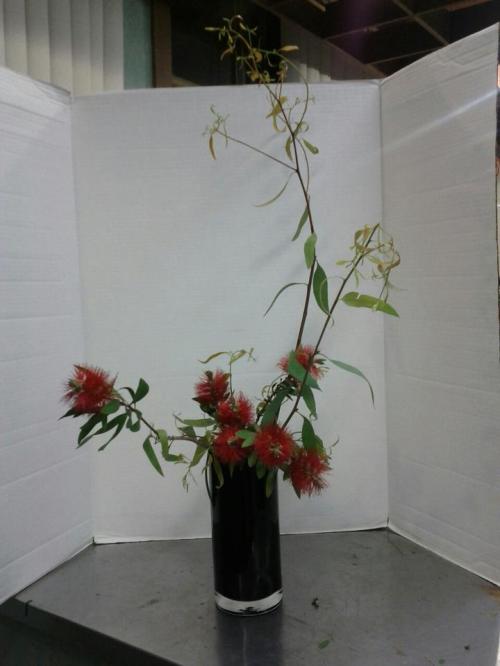 Third arrangement was reversing the style, a practice called Gyakugatte. I used bottle brush and eucalyptus.