I’ve been remiss in my blogging efforts on this here blog. The first five months of this year, I was blaming it on my English 1A class, but now that I’ve completed that, I haven’t exactly picked up the pace again back here. Hmm. That’s not to say I ain’t been a bloggin’ fool, though. Plus, I’ve been working five days a week at the nursery, and gardening on the other two (and occasional evenings). I’m trying to get back in the habit of getting up at four to run and do my daily writing before work.

Tonight at the nursery where I work, Flora Grubb Gardens, we’re proudly hosting the annual Garden Bloggers’ Fling for their cocktail party and mixer. I’m really quite excited to get to mingle with (upwards of a hundred?) of “my people.” The Fling flings the attendees around the country to various cities, where they explore local gardens and gardener culture. This year, SF is the grateful host, and they’ve been visiting private and public gardens over the past few days. I’m hoping to get some good networking on, and meet some of the other bloggers, many of whose blogs I follow. Can’t wait!

So, like I said, I haven’t exactly been completely out of sync with blogging, in general. I do have nearly ten other blogs that I’ve been tending to, with varying consistency. A little self-indulgent plugging ensues:

Zann Cannon Goff is my “personal” blog. I have tons of stories that have amused my friends throughout my life that they’ve told me I should write down, and I’ve always wanted to write a memoir. Starting earlier this year, I decided a great way to get rolling on it is to create a blog. I love it! It’s purely writing, telling personal stories that will someday become chapters in a book.

The rest of my blogs are all Tumblrs. Thanks to awesome cell phone camera technology, I take pictures everywhere I go, and it’s easy to pop pix into one of my Tumblr blogs while I’m bussing to work or waiting for my food. Recurring themes in pictures pop up all the time, and when enough do, I spin them off into another category of their own.

boZannical Tumblr is my familiar companion to this blog. I shoot garden and plant pics on the fly, and post them there. Occasionally, I bring a gallery over to this blog, in the category I call “Tumblr Salad.”

Over the Tracks is really what got it all started. My nursery job is in San Francisco’s Bayview district. It’s often referred to as “up and coming,” meaning it’s historically a poor neighborhood. It’s mixed light- and heavy-industry, with retail and residential buildings mixed in. In my walk from the bus to work, I am often confounded by the irony of what I see around me. People begging for food and clothing, and there are literally piles of wasted food thrown on street corners to rot every single night. Clothing tossed into vacant lots that are fenced in with razor wire. Toys and furniture broken and piled like snowdrifts against buildings, while small children run, dirty and barefoot, playing with sticks and dead pigeons. Prostitutes and drug dealers circling every single block, peddling their wares. Sometimes there’s something beautiful and not ironic. Whatever the case, I like to capture these things and share.

Spoon the Dog is all about pics of our dog, Spoon. Yes, I’m a doting doggy daddy. 🙂 We adopted her last year from Rocket Dog Rescue, and she’s just too photogenic to not take tens of thousands of pictures. You’ll see. Just last week, we started fostering, too. Rocket Dog needed some additional foster homes to help keep doing their amazing work, so we decided to pay it forward by helping another dog find a home. Currently, we’re fostering a Catahoula hound we’ve named Toast. 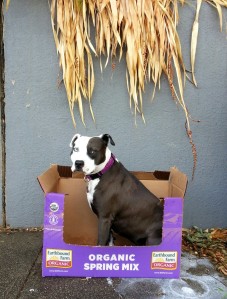 SF Graffeeti is a play on words to reference pix I post about some amazing, amusing, or just plain interesting graffiti underfoot. It’s specifically sidewalk and street graffiti that it painted or carved into wet concrete.

Have a Seat spawned from the extreme number of chairs and couches that are discarded around this town. It’s seriously bizarre. Some broken, some dirty, others in perfectly fine condition. A friend started a Flickr group with a similar theme, called Free Sofa. J’amuse. 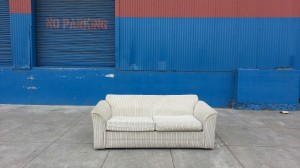 Island of Misfit Toys came from the proliferation of toy discards. Not just in the Bayview, but frickin’ everywhere. Again both functioning and/or broken. 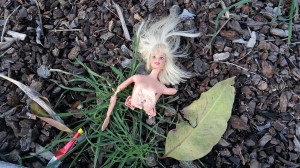 And lastly, Sea of Lost Soles. I mean, have you ever noticed just how many shoes there are out on the streets? Isn’t it weird? I think maybe people don’t want to just throw them out,  because they know there are people who need them. So, they put them on the street. Or, they just don’t want to bulk up their garbage. Or, they get drunk and lose one. Or they break. Or, a Bayview prostitute gets tired of the heels after a night out and just leaves them behind. Or whatever. There they are, waiting to be documented. Here I am, documenting them. 🙂

So, at least I’ve still been blogging. Hopefully meeting some other garden bloggers at tonight’s event at the nursery will inspire me to stay a bit more connected with this, my first! 🙂