The Drew School in San Francisco had a vertical garden put in a couple of years ago, and watching it grow has been fascinating! Now, I’ve actually heard comments that it’s looking “haggard and overgrown.” I’m gonna throw in my two-cents’ worth, and explain why I think it’s the most beautiful living wall around.

Patrick Blanc is a world-renowned garden designer, and has his own proprietary system for living walls. He’s very much in the forefront of the movement, and has been called upon to design his vertical gardens in public and private locations around the world. Here’s a great YouTube video interview of him, where he explains his inspiration and process:

So, why would someone who’s designed such colorful and eye-popping gardens as this: 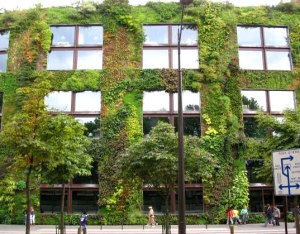 Blanc’s wall at the Musee du Quai Branly. (Image from inhabitat.com. Click to link to original.)

Seasonal browns and greens, thanks to seeds and semi-dormancy. (The rest are my own images.)

Personally, I think this last one is the most beautiful of these examples of his work.

The Drew School is located in the northern part of San Francisco. Some call it Lower Pacific Heights, but it’s really not. I’d call it Presidio Heights, because of the Divisadero division, but that’s an argument to be left to the realtors and who’s their target customer on a particular property. Could I say I live in “Western Upper East Side,” using the same logic? 🙂 Anyhoo, in 2001 the school began renovations for seismic upgrading and spacial expansion, and in 2011 they opened their assembly wing. When designing this new wing, the concept of a living wall was brought up. The parents could afford the best, and would have nothing less than a wall by Patrick Blanc himself. They generously pooled resources to make it happen. Here’s their page about the garden, with design sketches and all that.

Patrick Blanc is a quirky guy, always wearing green, and with green hair and long fingernails. A signature look. I think I took to him right away perhaps because I used to have a “signature” green pinky nail myself in high school. 🙂 When he was commissioned to do the Drew School’s walls, the school had to have him flown back and forth many times between his home in Paris and this job here in San Francisco. This wall was to be different than anything he had done, and he spent a couple of years researching the plants for it. He planned to use exclusively plants that were native to California and, in many cases, endemic to our own region here. During these trips, he travelled California to explore plants and gardens and nurseries. He made a few visits to us at Flora Grubb Gardens, in order to get Flora’s take. She/we are known for vertical garden design locally, and he wanted to gain some knowledge from her experiences with living walls in our climate. Gotta say, it was exciting to get to meet him. He’s the type of person you can tell is constantly cogitating, with everything you say.

What makes the Drew School’s garden so beautiful to me is not just the design. It’s the ecology of it. The fact that Blanc made the effort to use only native species means he really had to challenge himself to work with a palette of plants that were unfamiliar to him. In planting, his design aesthetic of diagonal drifts is very obvious, but the end result is so much more than aesthetics. It’s habitat. It’s more exciting from the horticultural perspective than the casual viewer will realize. The California plants are subject to the seasonal influences of our Mediterranean climate. We don’t get summer rains, and the plants are adapted to that. Summer growing relies on fog for water (which is plentiful, believe me), but the most colorful seasons for the vertical garden are going to be in fall and spring, when the rains are prevalent. To look at the garden in summer, you see plants that are traditionally dormant this time of year. You see plants that are desiccating from lack of rain. You see plants that thrive only in the fog season. Higher on the wall are the more sun-loving plants, which grow larger than the shade-growers at ground level. This gives a sense of scale that makes the building seem taller than it is, and almost like it’s leaning over you. It’s really remarkable to stand at the base of it and look up.

With this garden, you see seasonality. It’s a horticulturist’s dream wall. What looks to some like an “unruly” and “overgrown” vertical garden is, in reality, a gorgeous and innovative creation of native habitat. It’s a living wall that’s truly living. It’s so beautiful! 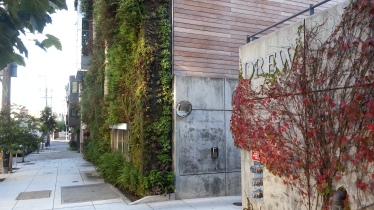 The entrance to the wing.

A side upshot showing the scale of the wall.

I love the integration of modern architecture and native plants!

Tall sun-loving plants stretching out at the top, shading those below and creating a sense of leaning.

A mossy section that’s always in the shade. It was slimy to the touch.

Grasses and heucheras and oxalis, oh my!

A view from standing back and looking up.

A closeup of Blanc’s patented felt wall system. Slits are cut into the fabric, through which the plants are inserted.

Some seasonal gaps and sparseness at the bottom.