I was taking our critters, Spoon and Toast, out for a long walk, when a tiny colony of moss on a brick wall caught my gaze. I whipped out the ol’ “macro” close-up setting on my phone’s camera to zero in on the detail of it, and decided to do a whole series on the walk. The overall theme of botanically-oriented pix is not unlike my Tumblr Salad series, except that none of these actually came from posts on my boZannical Tumblr. Thus, “Macro Salad” is what I decided to call this post.

I love taking macro shots of plants. I haven’t focused on doing so in a while, because it’s such a challenge to hold still enough to get a clear shot with two dogs on leash. I persevered. And yelled a good bit. Macro shots are great because you can really tune in to the tiniest details of a plant. Even plants you look at every day come into a different depth of observation when you see them in this manner. It’s amazing just how fine these details are! I’m grateful that my phone has such a phenomenal camera to help me appreciate what I don’t notice with the naked eye!

These pix were all taken around the western rim of Eureka Valley, above the Castro. 20th St, Douglass, Seward, Romain, Grand View, Corbett, Caselli, Yukon, etc. 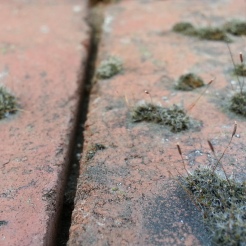 The tiny moss colony that started it all. 🙂

Soft and silvery foliage of an echium. 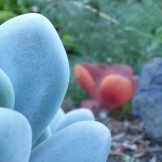 Graptopetalum (I think) in a front garden on Seward. 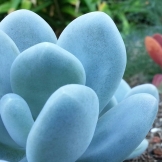 Detail of the graptopetalum.

A blue salvia in Seward Park.

Gorgeous Myoporum trees have been succumbing to a thrips infestation all over the region. They’re not much longer for our local plant palette, which is a shame. Gorgeous trunks on them.

A ceanothus in Seward Park. 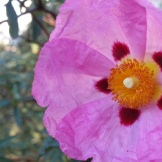 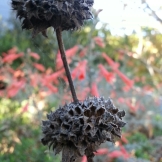 A yellow-to-pink lantana, at the spiral pedestrian overpass on Romain/Market. 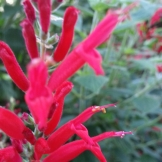 Another salvia, I believe. Hot magenta! 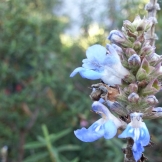 By the flower, I assume this is another salvia. 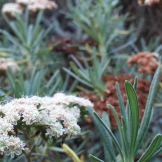 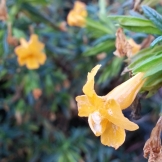 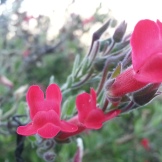 Another red salvia, at Kite Hill.

A tiny lichen on the split-rail fence at Kite Hill.

A euphorbia on Grand View.

Kangaroo paw, reaching down for your gaze on Grand View. 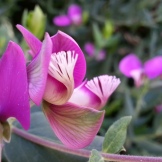 Another lantana, in hot colors. 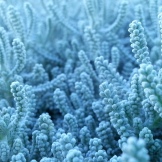 I can never remember the name of this glorious shrub. Yellow flowers float above this cloud of pure silver-blue.

A detail of the shrub. 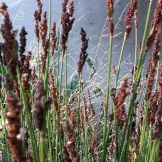 Seeds on a restio – Chondropetalum – on Romain. This was a pain to get a good shot of, in the wind.

Deceptively fuzzy needles on an Opuntia.

Mother of Millions, they call this. Kalanchoe tubiflora. Each of those tiny “leaves” is actually a baby plant, growing it roots out into the air and waiting to land on soil. 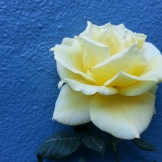 I’m not at all a fan of roses, but I AM a fan of color. And we all know how I love blue as a garden background!

Wow. Isn’t this blue the perfect backdrop for this spotted iris?

Another challenging photo in the wind was this Melaleuca that is blooming on Yukon.

Closeup of the fuzz on a Tasmanian tree fern – Dicksonia antarctica.

A lost earring, displayed among the fine air roots on the trunk of a Metrosideros excelsa – New Zealand Christmas tree.