After: A view from the deck.

This garden has been an ongoing project of mine for the past several weeks. A friend came to me for design help several months ago to revitalize the container garden on the deck of the upper-level flat in Eureka Valley (The Castro, essentially) where he lives with his partner. The project got put on hold when they decided to make some changes with the downstairs flat in their house. They wanted to convert the flat into a vacation rental, and needed the previously unfocused back yard to be “up to par” for such a rental. They have worked hard at refinishing the flat itself and getting it all up to code for the

(same "after" view without the enhancements)

official conversion, replacing and/or refinishing every floor of the Edwardian tastefully, and upgrading the kitchen, fireplaces, bathrooms, and the bedrooms. Besides having to furnish out the entire flat, the yard needed to be renovated as well. The yard needed to become a garden.

My friend is no stranger to plants. He himself has attended several of my favorite classes at City College, and volunteers at the SF Botanical Gardens. He, like me, 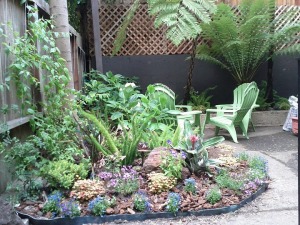 After: From the tunnel entrance.

brings plants home. That can be challenging when you’re brought in to design a garden. 🙂 For all the good intentions, he had been running himself ragged and had a hard time actually maintaining the garden. He needed help. My task was to clean the space up and brighten it up, and make it a soothing place where the renters can kick back and relax outside. It also needed to be easily maintainable. He wanted to preserve as many of the plants as we could, since he was so personally connected to having chosen them. Some of the plants there were perfectly viable and could be easily worked in without compromising my design, some had to be relocated or potted for better conditions or positions, and others simply had to go.

After: A quiet retreat.

Like my own garden, this has a northern exposure, and is deeply shady (except for one more intensely sunny spot). In fact, this was easily walkable from my own house for every workday. There’s a nice lower deck just off the rental’s kitchen, and a master bedroom that looks out on the garden as well. The southern edge of the yard has a high retaining wall topped by a fence. He had painted this a rich chocolate brown on the advice of my own garden mentor/teacher/friend. The western side has some 25′ tall Black Bamboo (Phyllostachys nigra) that had been planted over 20 years ago, and a camellia

Before: The bamboo hiding a camellia.

that was being strangled by said bamboo. Three gorgeous tree ferns (Cyathia cooperii) flanked that southern wall, and the eastern side was crammed with hydrangeas and a variety of other plants.

The client had sent me a picture of a streetside yard he had seen all planted up with purples, greens, and yellows, and expressed his love of the colors. I went to work. I wanted to incorporate the existing hydrangeas, a couple of potted Pittosporum tobira he had in gallon pots, and a few other plants already in the garden, but needed to unify everything. I did this by bringing in a dozen of one 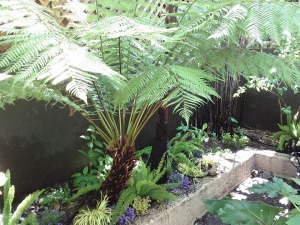 After: Brightening up the shade.

plant (Asparagus densiflorus ‘Myers’, or Foxtail Fern), and half a dozen of another (Japanese Sweet Flag grass – Acorus gramineus ‘Ogon’). These soothing repetitions of yellow-greens brighten the depth of the shade, and contrasted against the chocolate brown walls actually make the whole garden seem deeper and larger. A dozen spots of violet-blue came in the way of bellflowers (Campanulas), set off beautifully among the chartreuse. In the sunnier patch by the stairs, violet blends to soft pink with Nicotiana rounding out the pallet. Oh, and white! The garden already had a couple of small hydrangeas that are white. I moved one and pruned it, and left the other in place. Some pink jasmine (Jasminum polyanthemum) helps to beautifully unify the pinks and whites, and a clock vine (Thunbergia gregorii, also a recommendation from that same gardener friend), soothes the eye by balancing a peachy pink across the garden. You really want to sit and read or chat with a friend over tea (iced, Long Island or not).

Aside from moving the plants within the garden, some needed to be moved elsewhere for better light or water control. Some geraniums had to come out of the shade and into pots in the sun on the deck, for example. Primarily, though, pots needed to be cleaned up and unified. Ones that were in varying shades and shapes were moved into the existing collection of cobalt blue pots scattered about. I grouped these in a few key locations, leaving room for the client to continue to add to his collection over time by building upon these potted groupings. I potted some palms that had been struggling in the garden into matching pairs with some

After: Front entrance grouping. Palm from back yard, potted with new additions that repeat in the garden.

complimenting plants carried forward from the garden and set up flanking the front steps of the house to make a more welcoming entrance. Cramming some Hens and Chicks (Echeveria imbricata and E. secunda, in particular) into the spaces around the street trees out front on the sidewalk is to be the final plant group. My whole concept in this garden is that he has a space that is “never done” (I have a feeling he will always be adding and moving things at will), but nonetheless is complete in its current configuration as long as the foundational plants I put in are considered. The edge of the primary bed is bordered with small plants that provide the color impact he wanted for a photo shoot (for the rental website), but that also serve as a place for him to “update” his colors over time. A tinkerer’s garden.

The client strung wires through eye-hooks all along the neighboring fence to support the new vines while I worked on irrigation. He had an existing irrigation timer with a soaker-hose attached, and the yard was very very very well watered. I swapped out the soaker for a drip system, but truncated the soaker for the bamboo area. I may shorten it still more, but need to watch the bamboo’s reaction first. The drip irrigation will help to conserve water by putting it only where it’s needed for the plants, and saves money for the clients in the future. Emitters varying from 1/2 to 2 gallons per hour ensure each plant gets enough water without wasting any. I also ran drip to each of the pots, using the trick of running it under the deck and coming up between the floorboards right where needed. Bark mulch topped it all off, further helping to reduce water needs by insulating the ground and keeping water from evaporating. It also helps squelch out weeds if you pile it on thick enough.

The bamboo area also needed help. I got a friend to come in to remove a segment that was choking the camellia, and when he was done I dug in some new bamboo barriers around what was left. That was challenging, but I accomplished it. 🙂 We still have some lighting to install, once the parts come in. There is also talk of putting in a small fountain, but the joy of the tinkerer’s garden is that things like this can be added over time. He got some Adirondack-style chairs to add comfortable seating, and a table for the deck. When the plants have matured, the garden will be lush with ferns, grasses, philodendron, Bear’s Breech…

The place has a few rentals lined up already!

Before: Front entrance is begging for plants!

After: Beg no more!