I recently posted a story with a bit of info about sidewalk gardening, and thought this would be a great opportunity to revisit my Urban Hike series with a broader focus on gardening on the streets. This probably isn’t best suited to the Urban Hike series since so many neighborhoods are participating in urban greening and it’s not particular to a specific part of the City, but here we are. 🙂 Think of it as a call to get out and see what is going on in your own neighborhood in terms of urban greening.

A sidewalk garden in SF.

Street gardening has taken on many forms of late, but in reality these forms have always been in use somewhere. The biggest trend in SF street gardening is to remove sidewalk for planting, but there are also streets lined with potted plants (as I showed you in the Duboce Triangle in a previous post), whole blocks of street being closed off to traffic and converted to mini parks, and median strip islands along major streets being converted from concrete to plants and creeks.

I mentioned in the post I referenced above the benefits of opening a sidewalk to make room for plants: groundwater replenishment, putting rainwater to use for landscaping, reducing strain on the drainage infrastructure… Some majorly important factors I left out were larger global benefits: replacing concrete with plants in a city reduces the “heat island” effect – the phenomenon of cities retaining solar heat in the concrete and buildings. Also, it’s a good idea to put as much carbon-reducing plant life in as many places as we can, since the manufacture of concrete itself is a major producer of greenhouse gases.

Guerrero and San Jose Streets in SF’s Mission District were famously “greened” a few years ago. It was a dismal four-lane ribbon of pavement through the City, with little in the way of street trees. Removing the concrete from the median strip islands and planting them lushly with Mediterranean climate drought-tolerant plants led to a revolution of median strips throughout town. Divisadero was similarly replanted a couple of years ago (though I hate the tree they chose – Red Maples are gorgeous in climates where they turn red. Here they just go from green to brown to bare in a few days.) Octavia Boulevard replaced a deteriorated double-decker section of freeway after the ’89 quake made the change necessary, and the boulevard is now channels of traffic between long islands of trees. The latest major project is underway, opening the median of Cesar Chavez to expose the Islais Creek tributary that has been channeled underground for decades, and replant its banks.

Guerrero Street also saw one of the first “parklets” in town, where a funky block of the street was completely shut to traffic and turned into a public space, via the Pavement to Parks program. Since then, eight parklets have sprung up, and others are in the works. One of the existing parklets is right here in my own neighborhood three blocks away: 17th Street, at the intersection with Market and Castro, was cordoned off with planters and is now the only real place to sit outside in the neighborhood, thanks to tables and chairs and clever design of the planters. My nursery provided all the plants and pots for the parklet, so it’s fun for me on a whole different level given that I know the plants so well. 🙂 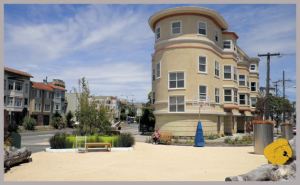 The blocked-street parklet in the Castro. Also blatantly stolen from beyondsf blog.

Other projects around town replaced parking spaces with a little plot of outdoor seating. The spaces literally take over a curbside parking spot, and get built up to sidewalk level on a little platform. They vary wildly – some are purely structural sitting spaces, some have tables for a restaurant, some have just plants…

A creative use of a dumpster as a parking space parklet planter.

My favorite, though, has been the sidewalk planting. It really transforms a neighborhood. The sidewalks around here are all very very wide, like 12-15 feet or more. I remember a spot in my hometown of Willits where the sidewalk gets so narrow that you have to go single file, and walk off the curb if you cross paths with someone coming the other direction. The sidewalks here blew my mind when I moved here as a fresh country chicken. The wide streets and sidewalks keep things from getting too claustrophobic. In the residential neighborhoods the width of the sidewalks isn’t so necessary, since there are not crowds of people window shopping. It’s perfect for creating planting beds!

A planting on 18th St in SF. Note all the removed concrete, now replaced by permeable surfaces.

The process involves inspectors coming to mark out the maximum space you can remove. Basically, they have to make sure there is a long, straight run the whole length of the block so someone can easily walk it without twists and turns. Whichever tree or staircase juts out the most dictates the width possible for the whole block. You can cut out curbside or against your house, or both, depending on the layout of the block. Curbside cutouts have to leave a one-foot-wide strip of hard surface for accessing parked cars, but the rest is up for planting. Of course, you also have to keep in mind where your water and gas pipes are, and be aware of overhead wires that could be a problem with whatever tree you might plant. Fortunately, there are so many options – even within those limitations! What a great way to beautify a neighborhood and improve the air quality. I hope the trend catches on in all major cities!