Taking on Floristry: Ikebana Lesson I

This semester at CCSF I started venturing into a new, but related, topic to my horticultural schooling: Floristry. The Environmental Horticulture department at school offers the whole range of landscaping classes (I’ve literally wiped out every possibility of classes they’ve offered since I began 🙂 ), and also has an award-winning floristry program. So much of my plant training thus far has been from the horticultural angle – gardening and plant care/maintenance. It’s great venturing into this field, learning ways to appreciate the beauty of plants from another perspective.

It really struck me over the past few months just how flower-free our own garden has been, despite the abundant flora all around us this time of year. My plant acquisition has been centered on things with funky foliage or form. There is definitely some good bloom to come, though! Getting a focus on flowers through this class is helping to make me more observant of flowers and to get me thinking about planting for year-round color in the future.

The class I signed up for is Ikebana (pronounced “ee-kay-BAH-nah”, vs. the “icky-bonna” I remember hearing since I was a kid). I’m fortunate to have a great instructor in Soho Sakai. She is a world-renowned Ikebana Master, and really a delight to learn from. Now, the school has the horridly politically incorrect catalog entry moniker of “Oriental Flower Arranging”. It’s more particularly a Japanese style of flower arranging, though. It’s kind of a funny story: our instructor created the class and its curriculum herself thirty-odd years ago. Her daughter apparently chastises her for naming it as she did, but she insists that “Oriental” was still being commonly used instead of Asian at the time she created the class, and she hasn’t bothered to change it and doesn’t really understand what’s so upsetting about it. It doesn’t bother her, and it’s her damn class after all, so the name remains! Doesn’t make it any less uncomfortable to say. 🙂 She actually created this curriculum as the very first community college Ikebana class in America, and gets called on for guidance in establishing Ikebana curricula around the country. (Presumably under the name Ikebana, since it’s so much more familiar in the American vocab now.)

Despite having no real floristry background, I have had lots of experience in gardening and design, and various arts classes during my lifetime. Speaking of, one I really recommend is a fantastic biennially-recurring CCSF class called Year Round Color in the Garden, led by a great teacher, mentor, and friend of mine, Charmain Giuliani. The class really got me to start paying attention to color interactions between plants (and containers) throughout a space. So far my arrangements in class are being well-received for their color/form/balance, and I must say it’s very gratifying and, naturally, adds to my enjoyment of the process!

So let’s get into some terminology: it turns out that Ikebana is a broad term, referring to any arrangement of plant materials. It literally translates loosely as “live plants”. I like to think of it like botanical orders – plants have a family, a genus, and a species to organize their hierarchy. I think of Ikebana as the “family”. The “genus”, the type of Ikebana I’m studying, is called Sogetsu. Soho teaches that Sogetsu is the school of Ikebana study that over time has been agreed is the most aesthetically pleasing to the human eye, and it’s what Westerners generally picture when thinking of Ikebana. There are over 12,000 schools of Ikebana in Tokyo that focus specifically on Sogetsu.

Then there are several “species” of Sogetsu Ikebana. This semester I am learning two of those: Moribana and Nageire. Moribana means “piled up”, and refers to arrangements in a wide, shallow dish that is called Suiban. This style requires the use of a weighted, metal bed of nails to hold the materials in place (Flower Frog, in English. Kenzan in Japanese.) The Nageire style utilizes a tall, cylindrical vase (Tsutsu) and requires building up a sort of scaffold of split sticks inside the vessel to hold everything in place. Then, within these “species” there are variations, much like cultivars in the horticultural hierarchy. My first semester starts with a focus on the two variations of “Basic Upright” and “Basic Slanted”, and both variations can be applied to both styles of container. There are many other variations, but hey, I’ve only had four classes!

I needed me some supplies! Got me a lovely container for Suiban where I work at Flora Grubb Gardens. Got me some Kenzans from a classmate with a huge stockpile to share, which is great because they can run $50 or more for a larger one. Got me some perfect snazzy snippers (Hasami) for the job from the aforementioned mentor. Got me some Tsutsu for future classes out of my kitchen cupboard (tall cylindrical sturdy glass candle holder). A rag and a bowl for water (always cut the ends of your plants under water) round out the basics.

Pretty example of Moribana, stolen from the Interwebs.

We also supply our own plant materials. My aim is to not have to buy any during the course of the semester, so I’m making creative use of cuttings from out-and-about. Besides wonderful castoffs at work to snip from and access to gardens where I can cut, I have, um, helped the occasional street tree with some needed thinning. It’s made for some unusual and interesting combinations, and it’s fun to challenge myself to find interesting plants around me. It’s important to balance textures and colors. It’s nice to mix upright, spiky shapes with low, rounded shapes, for example. If all your plants have the same shape it makes the whole arrangement more boring for your brain to process and thus makes it less interesting and appealing.

Pic stolen from the Interwebs. My teacher would say this arrangement needs to be corrected: Shin should not direct the eye AWAY from your piece. There should be a sense of unity, and this one is flailing.

I must admit I was completely “off” on my preconceived notions of what Ikebana actually entails. It’s not just a bunch of twigs and flowers stuck off-center in a vase or bowl. There’s a bit of a science to it, actually… A basic triangle is formed of three main extensions, Shushi. Then, there is actually some casually mathematical calculating to do, of sorts. This is the part that threw me for a loop. There is a mathematical balance between objects that makes them pleasing to the eye, and the practice of Sogetsu taps into that ratio to draw the viewer in without being blatantly structured. An asymmetrical balance based on a triangle creates an appeal on a subconscious level, soothing yet exciting. It seeks to make use of space, to create space and frame space that is as interesting as the physical components of the arrangement.

The tallest component of Shushi is Shin. It’s measured to fit the container size pleasingly by taking the width and height of Suiban and adding half again. Roughly, mind you. You have to take into account the bulk and structure of the piece you’re using. Shin represents sky and truth. Roughly three-quarters the length of Shin is Soe, symbolizing man and support. Three-quarters smaller than Soe brings us to Hikae, the moderating branch, or Earth. Other subordinate pieces filled in around Shushi help unify the materials and hide Kenzan, and are called Jushi.

Placement is fairly particular. The only lessons for my beginning level so far have been in the Moribana style, Basic Upright. These early lessons require Ni-Shuike – only two materials, but in future lessons we will be specifically using three (San-Shuike) or more. The Basic Upright requires that Kenzan be in “Position 1”. If you draw a “+” from rim to rim, Position 1 is the bottom left quadrant, and Kenzan gets centered here. The Shushi get placed in a balanced equilateral triangle on Kenzan, with nobody crossing each other or touching each other or the edge of Suiban. Shin goes first at the top and angles roughly 15˚ to the left and towards you. Soe comes next, on the left corner of your triangle. This leans 45˚ left and towards you, more or less. Hikae finishes the triangle on the right side, with a 75˚ forward and rightward lean. The ends of the three components of Shushi make a triangle from pretty much any angle.

I am, by NO means, a professional at this yet. I’ll probably look at these and laugh at my naivete in the future, but I’m pleased with them at this point! 🙂 The main thing is that I’m having fun with the class, anyway. 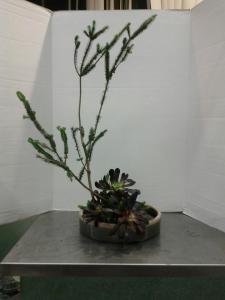 My second Moribana, Basic Upright. This time I used Melaleuca branches and rosettes of succulent Aeonium.

The third lesson was also Moribana, Basic Upright, but with the whole thing flipped to a mirror image. Reverse positioning is called Gyakugatte. Kenzan goes into the bottom right quadrant of Suiban (Position 2), and all the Shushi positions and directions get reversed. 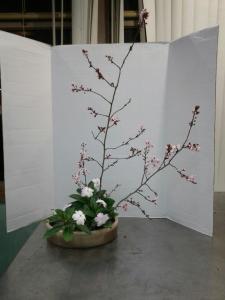 For now, that’s all I’ve got. I’ll be sure to include posts in the future, sharing the next steps from upcoming lessons!

7 responses to “Taking on Floristry: Ikebana Lesson I”