Putzing Around the Grotto

Yesterday I spent some time working in our own garden. Imagine that! Naturally, we had done something of a significant cleanup when we participated in the Noe Valley Garden Tour in May, but that was just what it sounds like – a cleanup. Yesterday was all about planting some new things, and transplanting some existing plants.

It all started because we have a hydrangea. Can’t remember it’s cultivar name, but it’s a dwarf pink one. It had fared fine where it was ever since we’d planted it last Fall, but with the recent heat we’ve had, it was getting crispy. It needed a more sheltered spot. 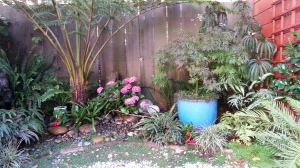 A new sheltered spot for the hydrangea.

The perfect spot required a bit of rearranging, and I’m so pleased with the end result! Up at the top of our garden, in the shadiest spot, we’ve created our Fern Grotto. An Australian tree fern (Cyathea cooperi) forms the canopy of the roughly 12×6 plot, and we’d planted that as a one-gallon with two fronds just a few short years ago. The other focus is my Precious: my Japanese maple (Acer palmatum ‘Orangeola’), in its bright blue pot. All around the plot are planted numerous ferns and, more recently, begonias. We’ve got a couple of varieties of California and Mexican native maidenhair ferns (Adiantum spp.), ribbon ferns (Pteris cretica var. albolineata), sword ferns (Polystichum munitum), chain fern (Woodwardia fimbriata), Japanese painted fern (Athyrium niponicum var. pictum), and a dwarf tree fern (Blechnum gibbum ‘Silver Lady’). Plus a camellia that I’m espaliering onto the side of our shed, some variegated Japanese sedge (Carex oshimensis ‘Evergold’), variegated spider plant (Chlorophytum comosum), my tall and glorious Begonia luxurians, orange and yellow natal lily (Clivia miniata), and another Japanese maple that looks like a marijuana plant (Acer palmatum ‘Goshiki Kotohime’).

Wow, when I try to name everything in there, it’s way more than I thought! 🙂

I should have taken some “befores”. I thinned some of the ferns, and removed a chain fern altogether. With that monstrous fern gone, I was able to move a sword fern out of the central focal point and into that corner. That left a fabulous spot for the hydrangea to take center stage. As it grows (ultimately only to three feet high and four wide), it’ll wrap around the trunk of the tree fern. Mmm. Can’t wait. Bitch gonna rock. My wooden horse sculpture has been having some issues (the left legs have both fallen off, and don’t want to help support her anymore), so I wedged her into the sword fern in its new corner, and in her spot I planted a new Brazilian variety of dwarf tree fern. This one is STUNNING! Can’t wait for it to grow! She’ll get as big as my Silver Lady, but the new growth is red that matures to a rosy pink (like some of my maidenhair ferns), and ultimately a bright green. It’s gonna be a show stopper! The pinks and reds will accent the hydrangea phenomenally. The camellia also has pink flowers “painted” with red stripes.

Nobody puts horsie in the corner. But I did. 🙂 The Blechnum brasiliense is the rosy fern at her feet. 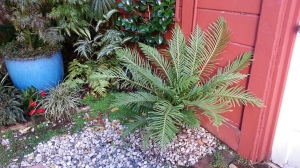 This is the ‘Silver Lady’ dwarf tree fern. It’ll get about three feet of trunk, eventually. The rose-toned one will get this spectacular!

Believe it or not, there was room for more after all the cleanup. 🙂 I was able to add some new begonias. I got some dwarf ones that remain under a foot tall, called ‘Illumination Scarlet’, that I planted in a few different spots. The brilliant scarlet is yet another nice reflection of the pinks and reds throughout the varying greens of the plot, and the blue pot with my maple pops out even more now. I also planted two begonias called ‘George Morneau’. Their leaves are much like the B. luxurians – long and narrow, dark green, with red undersides – but they’ll stay about three feet tall. I tucked one in behind the maple pot, so that the spring and summer white flowers will look like an extension of the taller luxurians that looms over the maple. I just can’t wait until this all starts growing in! You know I’ll be posting updates on my favorite spot of our garden as it matures.

‘George Morneau’ is just to the right front of the hydrangea. Small, for now.

Last task was to fill in the spot where I’d removed the hydrangea. We have a Bolivian fuchsia (Fuchsia boliviana ‘Alba’), that has done just fine in the same amount of sun, in a terracotta pot. I put that into the ground, and the arching branches with cascading tassels of red-tipped white flowers are exquisite. It frames the view of the Fern Grotto amazingly. I planted a ‘George Morneau’ begonia behind it, as well. It’s only about five feet tall right now, but with the extra room to grow we just might realize ten or more feet on this. It makes a prolific amount of sweet berries that I like to put on my granola, and blooms literally all year ’round in our garden. And the hummingbirds go crazy on it.

The Fern Grotto complete! That’s the Bolivian fuchsia on the left with the dangling flowers, and the Begonia luxurians in the back right corner with the umbrella-like leaf forms.

A pano shot of the whole Fern Grotto.

All that’s a very verbose way of saying I transplanted a hydrangea, stuck in some new plants, and cleaned up in the garden yesterday. 🙂 Thanks for reading along!

3 responses to “Putzing Around the Grotto”

Leave a Reply to STRAIGHT TO THE TOP! Cancel reply