This was a pleasant surprise for me, to be approached a few months back by Tuttle Publishing about reviewing a book. What a fun thing to do! I’ve seen other garden blogs posting reviews before, and wondered how one goes about getting into that “biz.” Apparently you just wait for them to find you. 🙂 Perhaps this will lead to more? (Hint, hint, publishers.)

So, I received my copy of Bountiful Bonsai – Create Instant Indoor Container Gardens with Edible Fruits, Herbs and Flowers (By Richard W. Bender) in the mail a few days ago, and was quickly impressed. I have to admit, I was skeptical when the publisher told me what book I’d be getting, because with my horticultural background I’m well aware of the challenges of growing edible plants indoors. I was hoping I’d learn something new, and I was not disappointed! 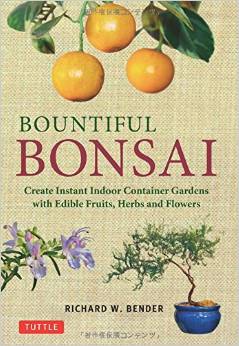 First off, Bender totally affirms what I know to be true about growing edibles indoors: largely, you can’t. There are exceptions, of course, but he goes into decent detail about what can and can’t be done. More importantly, he acknowledges that the way indoor bonsai is “done” is to grow it outside or in a greenhouse, where you know it’s going to succeed, and to bring it indoors for a day or two for a specific event or purpose, such as a centerpiece for a holiday table. People who do bonsai on a grand scale will usually have many to choose from, and will rotate the selection indoors, one at a time. With my skepticism now fully assuaged, I delved deeper into the book.

One misconception of my own about bonsai is that it’s always about smallness. Indeed, the idea is to grow a plant in a container, and thus in conditions that are tighter than the plant would experience in the ground in nature. But, it doesn’t necessarily mean the plant is going to be a “precious” sized handful of plant. I know that you shouldn’t expect much fruit production from an orange tree planted in a thimble, so I was curious about the expectations Bender would set. Working in a nursery, though, I do know that with proper water and fertilization, a citrus tree in a 5-gallon pot is remarkably productive. Bender dispels the myth that a bonsai needs to fit on a mantel. One thing that stands out to me is that he has overall heights listed in the captions of all his photos (“This specimen is 46 inches tall,” for example.) Some of the plants in his examples are, in fact, taller than I am myself. And they’re still considered bonsai.

Bonsai, by definition, is literally “planting in a tray.” Tray can be loosely termed, though, and really includes anything planted in a pot. The nuance that, to me, makes something a bonsai rather than just a potted plant is the artistry of it. The pruning and asymmetry. I’ve studied Ikebana for several years now, and love the Japanese aesthetic of asymmetrical balance and attention to sight-lines. That holds true for bonsai, as well. I’ve been to shows where I’ve seen Dawn Redwoods in a shallow dish that have been maintained by the same family, passed down from generation to generation, for over 500 years. People will get into twisting and shaping and constraining trees to force them into fantastical shapes. Therein lies the ongoing art of bonsai, but the truth is every bonsai had to get its start some time. This book provides a decent foundation for selecting a plant and paying attention to its needs to make it succeed, and Bender shows you how to select a plant and prune it in a way that can, in an afternoon, give you the impression it’s been trained for some time already. It’s up to you to pass it down for the next 25 generations and continue creating its form.

Bender talks about plant selection from fancy to inexpensive, container selection, planting and pruning, soil and water and sunlight, and planning for the plant’s future growth. There’s a fairly in-depth discussion of popular selections, with a great alphabetical listing (by common names, not botanical) of tried-and-true plants to use. The common thread among his suggestions is that most of the plants are culinary, from fruit to foliage, trees to herbs. There’s even a section on harvesting with a few recipes, including the ubiquitous bacon, which is not part of a bonsai planting. 🙂 The non-culinary suggestions are chosen for fragrant flowers.

Bender, according to the jacket liner, has been a nurseryman and bonsai specialist for over 35 years, providing bonsai for botanical gardens and conservatories around the country. His expertise shows in this book. It’s a good digest to get you started; something of a “survey” book, giving a broad overview of the art and craft of bonsai.

The book will be released on Amazon in a couple of weeks on 13 January, 2015, in both paperback and Kindle formats.