Ahh, Alcatraz! Last week I had time to get out to Alcatraz for some volunteer gardening work. Alcatraz is the first place I did gardening outside of my own home and classes at school, and it has always been a love of mine.

The Gardens of Alcatraz are a special place, indeed. Not everyone who goes to visit the prison is even aware that they have passed gardens on the way! You have to look to see some of them, peer over walls, but they are glorious nonetheless. When the prison was operational (and even before that, when The Rock was a military base), there were people living out there: prisoners, guards, prison(/military) staff, and their families. Yes, childrens! Childrens lived out there, too. The residents had gardens around their homes, there were “public” gardens for the inhabitants, the prisoners had a garden… These all went to seed once the prison shut down in March, 1963.

Alcatraz volunteer gardeners, off to work!

Forty years later, the restoration got underway to bring these gardens back to life, and I’ve proudly been volunteering there for over three years now. Many abandoned plants survived on their own without any care, living purely off the drip of the persistent fog. What survival! You’ll get plenty of these stories the more I blog about my experiences on Alcatraz, but it’s worth checking out the gardens’ official site in the link above.

The offending Acanthus patch... Before

My project this week was clearing a plant called Bear’s Breech (Acanthus mollis) away from the side of a toolshed so that other volunteers could get their little feetses in there to touch up the paint. This toolshed is an historic shed (as is any infrastructure within the National Park of Alcatraz). It was built by a prisoner, and was restored a couple of years ago so that we’d have a place to store tools on the remotest part of the gardens.

The restoration was cool, using old Victorian-era windows just like the original shed had been built with when the windows were “just old windows”.

This big patch of Acanthus was right up against the shed, and a major tripping/sliding down the rocky slope hazard. It needed to get out the way. I cut it all back, then prepped it for composting.

We have a great composter in the group. An uber-composter, if you will. Dick Miner has been a regular volunteer worker on the garden restoration project since it began in 2003/2004. He now holds the regionally-known title of The Worm Man of Alcatraz! His composts have won competitions, and he even creates a seed-free 100% Oxalis pes-caprae compost, if you can believe it! 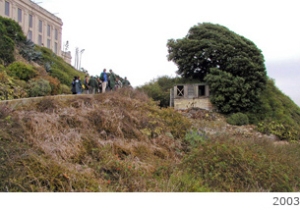 A patch of GORGEOUS Aeonium on the island!

Still, it’s always so rewarding to volunteer there, no matter what the work! I love just getting to sit there for two hours, cutting little pieces of plants, knowing that I’m doing my part to make this spectacular National Park even more spectacular! Can’t wait to share more stories from the Rock.

Oh, unexpected bonus lately: the next America’s Cup yacht races are being held in the SF Bay, so it was cool to see big sailboats practicing their precision sailing maneuvers…

America's Cup practice with Alcatraz background. Look at that fog waiting off the coast!

One response to “Into the Breech”