Urban Hike: A Day in Pictures at Mission Dolores

Okay, okay, so this is a minimalist approach to my Urban Hike series. Really, it’s just an excuse to post dozens of pretty-pretty pictures from inside the old mission, though I was impressed that they have over 130 plants in the cemetery, and have a botanical plant list and plan view to guide you if you’re interested in the garden aspect. Awesome!

I’m taking a class called Bay Area Archaeology: 1539-1846. It’s been a fascinating study of the years of recorded history from when California belonged to Spain and then Mexico. Of our classes, this one was a field trip to the Mission of Saint Francis of Assisi. The Mission Dolores, as it’s known ’round these parts, is at Dolores and 16th Streets, on the edge of the neighborhood named for it. It’s among the two or three oldest buildings in SF, being completed in 1791. It also has one of the few remaining cemeteries within city limits. Exploring the building and grounds is a great way to spend a couple of hours in the heart of SF.

There is so much history to the place, and all of it well-recorded and presented on the ol’ ‘Net, so I’m just gonna cheat and simply post pictures from the field trip and leave the dialog to what has already been written… On with the pix! 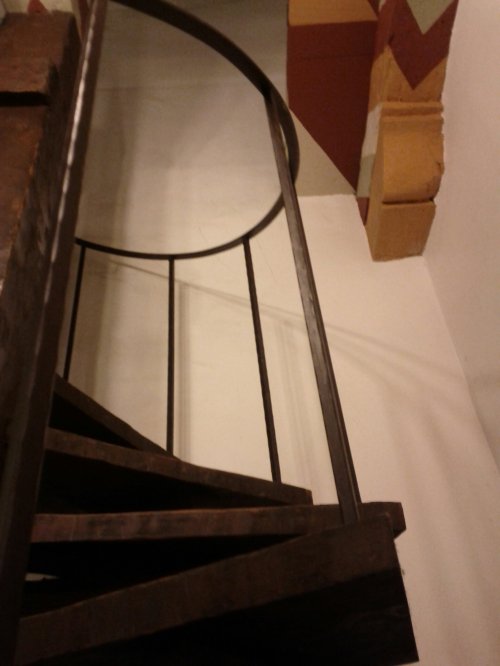 Stairs to the choir loft.

A detail of the vegetable-painted ceiling.

Hinge on the original redwood doors.

Bell cord. Wish this one hadn’t turned out so blurred.

Side altar brought over from Spain in the 1700’s.

Between the Mission and the Basilica.

Urns in the corridor to the cemetery.

A lovely potted courtyard garden just outside the cemetery.

Botanical listing and plan view of the cemetery!

Basilica over the Mission’s wall.

A sarcophagus in the cemetery.

Graves in the old cemetery.

There is a replica of a local native tule reed hut in the cemetery. Tule reed detail.

Birds of Paradise against the wall.

Detail from an iron surround on a grave.

A six day old child buried at her father’s feet.

Shard of a marker, leaned against a tree.

Appropriately, Saint Francis stands by at the cemetery gate.