Y’all have followed along as we learned details of basic upright Moribana in lesson one, and in lesson two as we took on basic upright Nageire. We did these both in Hongatte (normal position) and Gyakugatte (reversed position). The last part of the beginningest of beginning exercises is basic slanting, both for Moribana and Nageire. After these couple of arrangements, we have mastered the basics and move on to “High School”, in my Sensei‘s words.

You’ll remember (or review) that the basic upright calls for your tallest component, Shin, to be 15° off vertical, and Soe to be 45° off center. For basic slanting, you simply reverse those two components of your Shushi. Sounds simple enough, right? Still, we’ll be keeping in mind the form of your materials and making sure they still interact with each other how you want. It’s not just swapping the two branches, but also swiveling them to make sure they still face each other properly. My teacher says they need to kiss – you don’t want one trying to kiss the other as it’s trying to get away.

In the basic slanting Moribana, there is also a difference in placing your Kenzan. In Hongatte, it’s in position 1 (front left quadrant). When we get all Gyakugatte on it, we move it to position 2 in the front right quadrant. To appreciate the form of a slanting arrangement we don’t want the materials to hide the basin of water, so we move Kenzan to position 3 in the back right quadrant. This allows for the more open form of the arrangement to appear to float on the water. The water is an important component in Moribana and needs to be visible.

Me, proudly posing with my first basic slanting Moribana.

I really like the basic slanting Moribana. So far it’s my favorite of our lessons, and to me the most appealing positioning. You can see how pushing Kenzan to the back opens up the water and makes the whole thing more relaxed. I love how the balance of Sky, Man, and Earth is resting on a pool of water, the four elements in harmony with each other. Water is a component of all the styles we’ve done so far, but here it is the most present, the most significant. In basic upright, the arrangement is up front and very exciting, but here it is such a soothing placement.

My second basic slanting Moribana, using a red Japanese maple and Peruvian lily. This pic does not do it justice! The lily has little flecks of gold that perfectly match the container, and flecks of dark red to match the leaves. Oh, it was good. 🙂 My Sensei called it Gold Medal! What a thrill and honor!

In basic slanting Nageire, we swap the positions like above, but it comes in handy to learn a different technique for getting everything to stay put in the vase. For basic upright we used Soegi-dome, the upright stick scaffold method. For slanting it’s easier to have the pieces braced differently. Jumonji-dome is the method of using two sticks, called Komi, to make a firm crossbar at the top of your Tsutsu. The beauty of these two methods is that you can interchange them as needed. Your Soegi works better for thick or woody components, and your Komi work better for skinnier and/or floppier plants. The biggest challenge using Jumonji-dome is getting things to stay where you want them and not rotate with gravity. The pieces all rely on each other to brace in and stay facing how they should.

Cutting the Komi exactly to fit the inside of the Tsutsu.

You want to get a firm stick, slightly flexible, and straight. Perhaps a quarter inch thick to a half, or so. Cut one end at a 45° angle. Lay it across the top of your container with the “short” end of the cut exactly at the inside edge of the container. Cut the other end flat, exactly at the inside edge of the container. Repeat, cuz you need two to make a crossbar. You might have to do it several times at first, as I did, to get the right fit. Take one of your freshly cut Komi and put the flat end against the inside wall. Hold it firm while you push down on the angled end, bending and smashing that angle down into the container. You should be able to lift your container with it, even full of water! You want this first Komi to go in within a half inch of the lip of the container.

Second piece goes under the first.

The second piece dives under the first. Same thing: brace the flat end, but pull up on the angled end to engage it. If you do these in reverse order, you end up pushing your first stick down into the container, so it’s important to put the top one in first. If it pops out while placing the second, it’s easier to fix than if you’d done it the other way around. 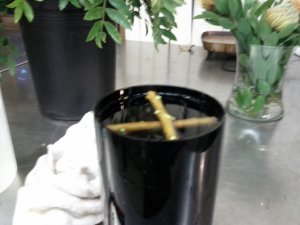 The water level should just tickle the top of your fixture. Now, the beauty of the function of Jumonji-dome is that your flower stems only need to barely catch under the sticks or each other. It’s amazingly stable, even with no stems hitting the bottom of the container.

You’ve chosen your materials, picked which branch will be which Shushi, and now you’re trimming. Thin out your materials as needed. Trim lower branches out of the way. You want only bare stems to be in the water. It’s about deconstructing and reconstructing: you’ll trim leaves out, but put them back at the end to fill in where you want it.

Cutting at a 45° angle makes it easier to stab your way into the thickening arrangement.

Stripped out those base leaves.

As you insert each piece, it will touch two places. Your Shin and Soe will brace against the inside wall of the vase, and lean against the rim or the wood of the fixture. The Hikae and the Jushi will hook under the fixture and lean across the rim. It can be helpful to put your Shushi in place, then put some lower Jushi in place before creating your focal point. It’s easier to build up than to have to insert under pieces you’ve already positioned, as they are likely to dislodge.

My finished arrangement, before inspection. 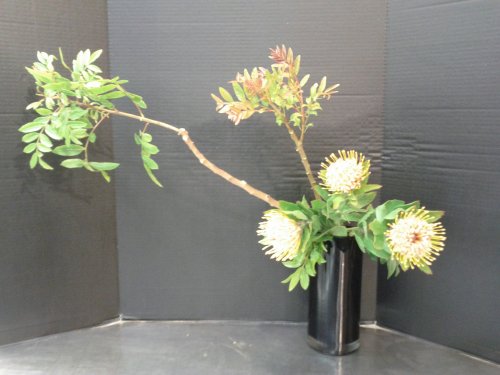 And after inspection. Notice how she had me take out two of the pincushion flowers. It was too “heavy” with five. And I also had to trim my Shin, too, as the upward puff I’d left was too distracting. The branches are Brazilian pepper tree (Schinus terebinthifolius).

Something I’ve alluded to, but haven’t actually been specific about, is lean. As we’re inserting our bits, we angle everything so that the whole arrangement is leaning forward. In a Kakei-zu diagram like this one you can see the overhead plan, and see the components lean forward. It’s hard to pick up on that when you’re seeing it from the front, and that’s the intention. Ikebana are created to be viewed from a specific angle. The entire arrangement will come out of two quadrants of the fixture, in the front. The back half remains open so the water and air can meet, and it also helps with the leaning effect.

Side view. Quite a lean, huh?!

Horrendous photo, but this was the following week’s arrangement. This was done Gyakugatte (reversed style), with a native willow and some Dietes flowers.

Thanks for following along for this installation of my Ikebana learning and sharing! Are any of you working on Ikebana, or practicing along with me? I’d love to hear how it’s going, or see some pictures! Feel free to add comments or send links to your pix.