Spoon and the City.

With growing up in Nor Cal, and twenty years of living in San Francisco proper, I’ve been to the top of Twin Peaks by car a number of times. But, I had never fulfilled my desire to hike it. Until the other day! Great opportunity to expand my Urban Hike series of posts while I’m at it. 🙂

We recently adopted a new dog, whom we named Spoon. She’s a sturdy little Staffordshire pit bull and loves extensive walks. Fortunately, so do I. So, I figured it was time to see if I could find a route to the top of Twin Peaks at long last! From the Castro to the top of both peaks was a leisurely 3 1/2 hours, round trip. A decent tiring-out for the both of us, I must say. 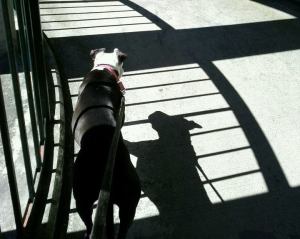 Spoon on the spirally ramp.

We headed out the door and let intuition be our guide. With no real route planned out, it was intended as a blind exploration. There was really only one particular place I had seen that I specifically knew I wanted to go, and that was to cross a pedestrian bridge that spans upper Market Street at Romain with a spiral access ramp that appealed to me. It was cool. 🙂 I’m a dork for spirally things. 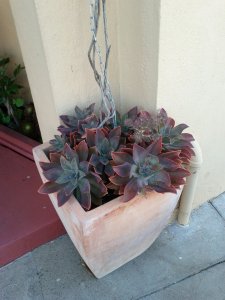 Beautiful! Echeveria (or perhaps a Graptoveria?) in a pot somewhere on the upward hike.

We went uphill. And whenever our uphill path came to a T, we’d turn and go whichever way felt right until we came to another uphill option. We took streets, we took stairs, we climbed slopes and crossed fields, took paths, and occasionally met dead ends that forced us to turn back. There were so many interesting things to see! Cool houses, cool plants, beautiful gardens… It was rewarding to finally get to the edge of the Twin Peaks open space, and start climbing rocky paths through the native coastal scrub plant community near the summits. Poison oak and coyote bush abounded everywhere, and open grassy areas between. We came to a wall alongside the top road. I had to hurl Spoon over, then haul my tired butt over the wall behind her, and we were finally at the actual peaks and ready to highpoint both of ’em.

On the return trip I intentionally steered us down different streets than we had taken on the way up. It all got me to thinking about leading an Urban Hike type of thing, taking groups on hikes to scenic spots and “hidden” staircases and the like. Hmm… In the end, we were both glad to get home and kick back for a spell after that one. It was excellent exercise, though, and I highly recommend it!

The northward view from the top.

View to the south, towards Candlestick Point.

Ocean! What a gorgeous clear day!

Sutro Tower from the top of Twin Peaks.

Skyline over the lip of the hill as we ascend. 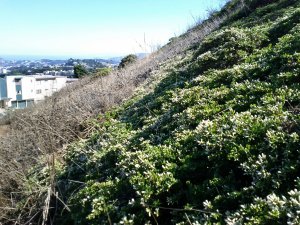 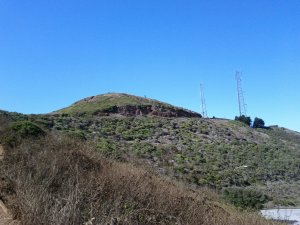 East Bay, from the summit.

A peek of skyline over some houses as we descend. 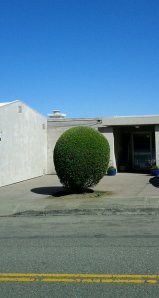 A lonely and heavily restrained shrub. 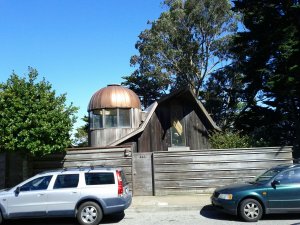 What an awesome house! 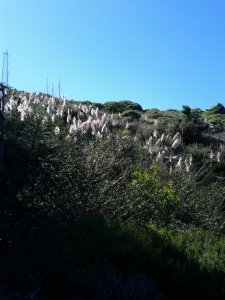 A bit of a pampas grass (Cortaderia selloiana) invasion. 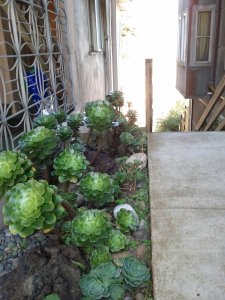 Aeoniums along a staircase on the descent. 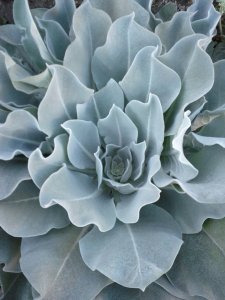 This lovely little number greeted us on our last staircase on the way down. Two feet across, she was!