With as long as I have lived in SF, I can’t believe I have never visited McLaren Park in the southeast corner of SF. It’s the second largest park in town, and it’s huge at 317 acres. I think the biggest reason I’ve never gone is lack of a car and lack of a direct bus route to get there. Yesterday we had access to one of them there vee-hickular mobilitatin’ dee-vices, and given that it was my birthday I wanted to check out the park and made it happen at long last. Perfect opportunity for an addition to my Urban Hike series!

A couple of weeks ago I blogged about my day on the Portola District Garden Tour. The neighborhood borders the park on the northern and eastern sides. It was tantalizing to be so close to a park I have wanted to visit, but the tour hours restricted how much I could see that day. Then, we signed up our new dog, Spoon, with a dog play group that comes to the park to swim in a reservoir a couple times a week. Wait, there’s a swimmin’ hole for dogs in town? Had to see what that was all about. We set out to find this dog play area and explore the vicinity around it. Being into gardening and naturey stuff and all, I wanted to see what the landscape was like.

John McLaren Park is a wild and woolly park. It’s not at all a manicured city park, but rather is an excellent natural open space. With many hills and steep valleys, paths both paved and dirt lead you through Eucalyptus groves as well as areas of California plants. Ceanothus abounds, there are oaks, we found a redwood grove, lots of coyote bush… And all within close proximity of the dog lake! The park, seriously, is too huge to explore in a day. We only managed in a couple hours to play in the reservoir and explore the immediate surroundings – basically, the area of the map where the red “A” marker is, up to the roads bordering it all around… It’s amazing how rural it feels inside this park. You find spots with amazing outward views across the Bay, but otherwise the hum of distant traffic is the only sign of civilization around you. You can really get away inside this place.

The first peek of the reservoir, from the parking lot.

Tony and Spoon heading for water…

What a treat, I must say. Another dog owner (actually, in SF we’re officially and legally referred to as “animal guardians”) kindly and enthusiastically went on about the attributes of the park. Quiet, easy to find space to be alone, off the beaten path, “natural” areas. There are recreational facilities (pool, ball fields, etc.) fringing the park, but the interior is kept untidied and wild-like. Great exercise to walk around for a day!

Spoon testing the waters. She’s not much of a swimmer.

Our enthusiastic guy also told us about an awesome visitor-made stone labyrinth. Now, I’m big into labyrinths. Have the one from Chartres tattooed on my back, in fact. At the southern water-access ramp of the reservoir are paths leading off in every direction. Following the one that goes up the hill to the east, we climbed to the top of the hill to find the labyrinth. Right at the summit we found it! It’s made from laid-out rocks, but people also have incorporated all sorts of found objects from around the park. It appears that it’s an ongoing work. I love a labyrinth, the introspective journey to the center and back out, and this one is magically detached from the rest of the world. The found-object additions add a quirky touch and provide extra fodder for contemplation on the journey.

Pretty patina on a fallen tree. 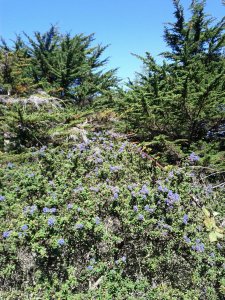 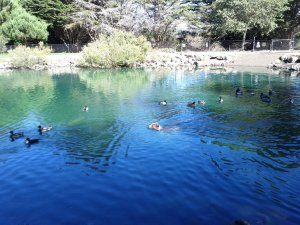 A happy dog (not Spoon) slowly swimming after ducks. 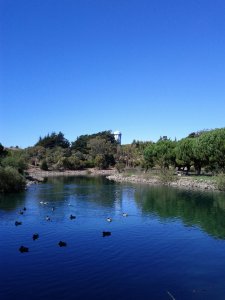 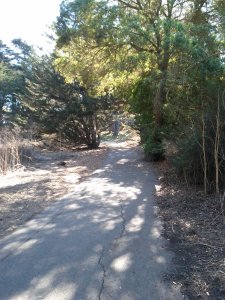 Heading up the road, lookin’ for some labyrinth… 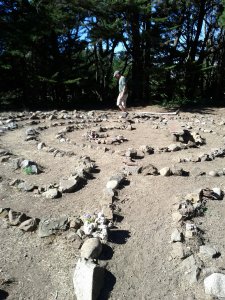 Tony on the labyrinth…

Fake flowers in a rock. 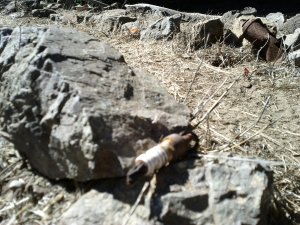 An offering spot for found objects greets you at the center.

Orange boa feathers in a rusted paint can, like flames to warm the imagination.

Dish of glass bits, shards collected like thoughts regrouping as you wind back out.

I liked the silvery contrast of the dead branches entwined with the verticals.

The young redwood grove we visited…

Tony and Spoon, as we hike our way out of the dell…

After this gorgeous day in the park, I can’t wait to get back and explore another section! So much more to see…