DAAAAAAAAAAANG, yo! My last Ikebana post was way back in May. May! I finished that last semester, went through a school-free summer, and have since completed the whole Fall semester of Ikebana classes with no follow-up posts on my learning process. We just had finals the other night, and I realize I’ve got some catching up to do. 🙂

The first semester is all about doing one lesson at a time as you get your feet wet in the process, but in my second semester I worked at my own pace and fast-tracked a bit. Two lessons a week is acceptable, especially since I’ve really embraced the process and the teacher is very complimentary of my arrangements. She knows I “get it”, so I’ve been running free, so to speak. At the proper pace, it takes five semesters to complete the four books of lessons. You’re allowed to take the class only four times, though, so I’m trying to complete the curriculum within those four semesters allotted. By doing two lessons a week I’ll easily accomplish that.

I earned my first certificate earlier this semester! I’m officially a Yonkyu Ikebana Practitioner (Beginner), and am four arrangements away from Sankyu (First Level Advanced). The certificates come directly from the Sogetsu School of Ikebana in Tokyo. Looking forward to receiving that first document in the mail.

Okay. On with some learnin’. For a thorough refresher (or if you’re joining me for this process for the first time and want to know the background) you should read Lesson 0 and Lesson 1, but I’ll give a nutshell review here. There are three main components (Shushi) in an arrangement. The longest one is called Shin, and represents sky. Next one down is Soe, and represents the person. Shortest is Hikae, and represents earth. In a basic arrangement, Shin is upright-ish: it leans 15° off center, both to the side and forward. Soe leans 45° to the side and forward. Hikae hangs out on the opposite side of the central axis, with a 75° lean and tilt. All the filler and complementing pieces are called Jushi. 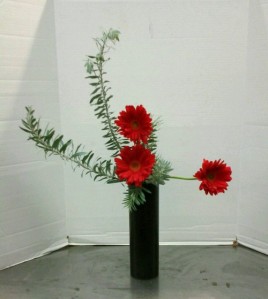 There are two primary container presentations, too. An arrangement in a wide, shallow dish is called Moribana. Nageire is an arrangement in a tall vase. One by one we learned each style in each container. Meaning, Basic Upright Moribana. Basic Upright Nageire. Basic Slanting Moribana. Basic Slanting Nageire. And on and on. After the basics, we moved into variations on the basic theme. And here we are, all caught up now and ready to move on with my next lesson at last.

Which brings us to Variation #2. (I showed you Variation #1 last time, back in May. May! Dang, yo!) Essentially, Variation #2 is swapping positions for Soe and Hikae. You leave the tall Shin in place, but put Soe in the low 75° position, and Hikae standing next to Shin. That’s basically it, but of course in choosing materials you want to pick pieces that look appropriate for their position. Just yanking the two pieces out of a basic arrangement and cramming them in the opposite spots doesn’t necessarily look right, you know? You still need careful selection for the right aesthetics. 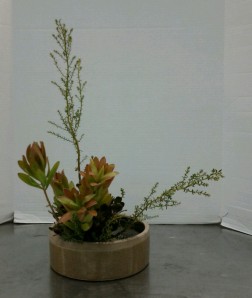 Upright Moribana Variation #2. Here I used Ozothamnus (creosote bush) with a blushing leucadendron cultivar, and Coprosma ‘County Park Red’ for extra Jushi. This particular container’s proportions are a little “off” for Ikebana. It’s a little too deep for its diameter. Makes the arrangement feel a little dense and “bunched up”, not in a good way, I think.

Then we moved on to Variation #2, but in Basic Slanting style. I shared the details of Basic Slanting in one of those earlier posts. The deal with slanting is to swap Shin and Soe. In the Moribana dish, you also move your floral frog (Kenzan) to the back of the dish. Basic Slanting Moribana is my favorite arrangement, I’ve gotta say. It’s the most pleasing to my own eye, since it creates a wide presentation with the water in the foreground. It emphasizes the focus of the arrangement by making it float on the water. Very soothing!

Basic Slanting Moribana was our test arrangement for finals this semester. I used Acacia cultriformis with a type of aeonium. My teacher loved my “sensitive eye” with monochromatic materials! 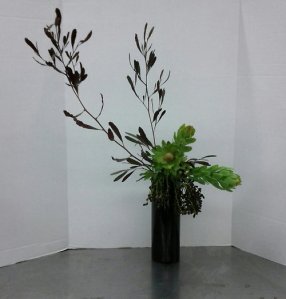 Basic Slanting Nageire was our other test arrangement in finals. Not to brag, but I think I rocked the heck out of this! Dodonaea purpurea (purple hopseed bush) and bright green Leucadendron ‘Safari Goldstrike’ are tied together in color by the purple fruit and green stems of pygmy date palms (Phoenix roebelenii.)

Variation #2 of Basic Slanting adds yet another twist. The beauty of all these variations (and there are many further lessons to come) is that you can take any plant material and find the best angle to present it. There is a variation arrangement to accomodate it! In Variation #2 you again leave Shin in place (in its slanting position now), and swap Soe and Hikae. Meaning, compared to the original Basic Upright lessons, all three Shushi have been rotated one spot, clockwise.

Come back next time, and I’ll introduce you to Variation #3, upright and slanting, Moribana and Nageire. More fun to come!