Living in an urban environment usually means coping with dense populations, cramped quarters, and tall buildings. Often, the premium on space means our own homes are small. Heck, here in SF, they are even considering allowing 220 square foot single room micro apartments (which, despite their diminutive size, are twice as large as some being built in Tokyo!) With space being such a valuable urban commodity, it’s increasingly important to allow places for humans’ instinctual needs to interact with the outside world.

Especially with modern apartments nobody is being given so much as a bathroom window, let alone yard space. Even balconies are more often considered a liability and left off the blueprints. Sure, there’s a lot you can do with your interior space when it comes to plants. Frankly, though, not everyone is good at houseplants – or wants to be, for that matter – and houseplants still don’t take you outside. It’s in our nature and important to our health to spend time outdoors. We’ve been connected with the outside world since the dawn of humanity, and as we concentrate our populations more and more densely in the cities it’s important that we find new ways to be able to interact with plants and open space.

Enter POPOS. POPOS stands for Privately Owned Public Open Spaces. Recently I stumbled across a printable PDF map of SF POPOS in the super-dense downtown area, and this post was born! The idea fits in perfectly with a piece I’m working on for Pacific Horticulture magazine’s Spring 2013 issue, which will be on the theme of re-wilding urban areas. 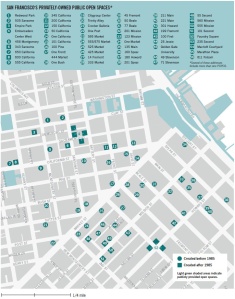 Essentially, they act like a public park, but the primary difference is they are on private property. (Duh.) With taller and bigger buildings being built all the time the skyline is getting denser. So many of these new buildings include high-concentration housing. Theoretically, one of these new residential highrises alone could house the town of Willits, CA, where I grew up. That’s a lot of people in one building! The Board of Supervisors recognizes that we still have our needs to get fresh air, and requires any new building of this type to incorporate open space that is accessible to all as part of the plan. These POPOS are subject to closing during off-hours, but during the daytime they must be open to all.

Some of these spaces are plaza-style, at street-side and essentially widening the sidewalk area to allow for relaxation with benches or whatnot. Others are courtyards. Some are little parks or gardens. And still others are rooftop decks. The new Transbay Tower will have a roof garden five blocks long! When I first moved here over twenty years ago as a tender young “country boy” I marveled at some of these roof gardens. I loved going into every exciting high place I could access (the roof of the tallest building in Willits – 3 stories – was the highest I had previously been, after all.) Gardens on roofs were a “big city” concept to me, and I relished it. It was like the Hanging Gardens of Babylon, and I was an explorer discovering them.

A similar attitude towards the need for open space is behind the parklet phenomenon that is becoming increasingly prevalent here in SF. Businesses can apply to turn a metered parking space or two into a dedicated mini-park, as a means of providing hang-out space where it’s most needed. Many growing neighborhoods lack ready access to a park, so these tiny little one- or two-parking spot pseudo-parks give a place to sit out of the path of foot traffic. I did a post about those a while back, if you want to read more on that aspect of urban space.

With said printed map in hand, my goal is to experience (or re-experience) these spaces a few at a time. I will post about them in groups, expanding on my Urban Hike series…

Before knowing they were called POPOS I frequented some of them. On top of a Wells Fargo bank is an especially tranquil garden with fountains, right in the middle of the busy shopping district. If it weren’t for the car horns, you would think you were miles away, perhaps lounging on a cafe terrace on the shores of Lake Geneva. I used to love spending my lunch breaks at this one when I worked at Britex Fabrics up the street, trying to decompress from the intense customer base and reconnect with a sense of reality.  Next to the Transamerica Pyramid is a planted redwood grove, and being from redwood country I had a strong draw to it. I discovered this one when I went to the pyramid to check out the 27th floor viewing lounge. Actually, at first I found the grid planting of the redwoods to be so contrived and unnatural it made me feel uneasy, but I’ve really come to appreciate their existence there. Especially now that they’re over 40 years in the ground and gaining stature. I loved exploring alleys and coming across small plazas with fountains and benches and quiet places to sit.

Not all of them are so easily found, so the map is a big help. There are requirements that signs be of a certain size and height off the ground, with a minimum font size and prominent placement, and post the hours they are accessible. Some of the buildings have created these gardens begrudgingly because it’s obligatory, but don’t really want “riffraff” (anybody not elite enough to live or work in the building) to know about them. Legislation is making them come into compliance, and all new ones will be compliant from the get-go.

SF Gate (our local Chronicle paper’s online presence) has a couple of decent articles on them. This one from 2002 lists ten and describes them in a bit of detail. Here’s another more recent one with a nice opening shot of the Wells Fargo roof I mentioned, singing the virtues of making them beautiful spaces for public enjoyment whilst simultaneously being condescending about the architectural style. I dunno. I like that garden.

San Francisco really is fantastic in its desire to cling to the natural world as much as possible, and we have a very vocal citizenry who insist on not being overlooked when it comes to benefitting all. In my Urban Hike series I’ve been highlighting parks and walks we can all make use of for some outdoor recreation. I plan to visit a few POPOS at a time and tell you what they feature and what I think about them. I hope you’ll continue to read along with me as I expand on this section with explorations of our many Publicly Owned Private Open Spaces!