A client of mine, for whom I’d potted a street tree a couple of years ago, has a couple of apartment buildings around San Francisco. I occasionally do a little pruning and garden cleanup here and there, and he recently contacted me to rework a garden for one of his units. The tenant was moving out, and hadn’t maintained the small garden during his time there, and my client wanted it to be photo-ready to put the place on Craigslist the following weekend. I had free reign to plant whatever I saw fit, within a set budget for plants and labor. A fun challenge!

I picked out the plants I wanted, and realized that left no room for labor. I was able to charm him into almost doubling the budget, fortunately! I was too enthusiastic about my plant selections to want to reduce them. 🙂 He was gracious enough to accommodate my vision for the space.

Mount Olympus is a cool little knob of a hill, halfway between Tank Hill and Buena Vista. Historically, Adolf Sutro had built a monument at the apex of the knob, ostensibly to serve as the “geographic center” of SF, and to provide a sense of pride and signal to the post-1906-quake populace that the City would rise again. It’s not really the center, but it’s not far off. By the 1920’s, the hill was developed with apartment buildings, including this client’s property, and the monument and statue were soon overshadowed. In the 80’s, too many drunken kids had been injured trying to scale the sculpture, and it was removed to Golden Gate Park or something. The pedestal still remains.

The property manager came through while we were working, and took us up to the communal roof deck to see the amazing views. Seriously, amazing views! Mount Olympus truly has 360° views. Phenomenal, and it was a perfect day. The penthouse apartment directly below this had the same views. Total apartment envy. Can’t think about it. 🙂

View from the roof deck, eastwards toward the bay.

Southern view of Sutro Tower from the roof deck. 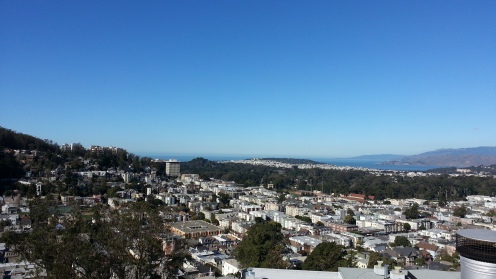 Western view to the ocean from the roof deck.

The garden was overgrown with wild grass and Oxalis pes-caprae, but some of the original established plants were still in place and viable. One skinny bed along the wall had a muted rosy-pink bougainvillea. The larger bed in the front (southern) corner had a camellia that I can tell has pink flowers. Both beds have pink jasmine (Jasminum polyanthemum) trained onto the foot-square trellis fencing. I used this green and soft pink palette as the foundation for my plant choices.

BEFORE: Major pruning ahead.

Tony and I cleaned out the grass and Bermuda buttercup, doing our best to get the grass roots and the oxalis’ corms, though I know we couldn’t possibly succeed at being thorough in such short order. I pruned up the base of the camellia to let light through (“lifted the skirt,” as gardener lingo would have it) and to open up the space. I trimmed the bougainvillea and wove it through the fencing. We trimmed jasmine, and steered it in the right direction.

In a small garden, too many varieties of plants can make it feel cluttered, so I stuck with just a few species. The long, skinny bed against the wall had the bougainvillea in the right corner, and a jasmine in the center. I wanted an anchor plant for the left corner. I picked one of my very favorite plants: a South African shrub known as silky net bush – Calothamnus villosus. This fuzzy-branched shrub will grow to about 6 or 8 feet tall, soft grey-green, and the last five or six inches of each branch grow rosy pink. It’ll be a great look with the other pinks in the bed.

The focal point of the larger front bed is a low-growing Cordyline ‘Electric Pink’. I got this in a 15-gallon container so that it would have instant impact. A real show-stopper. Dark and light pink stripes on grassy blades draw your eye to the corner. In both beds, I repeated the grassy form by using a soft blue-grey clumping grass, Festuca glauca, plotted in repeatedly throughout the beds. In the backgrounds, I lined the fences (and wall) with tall Aeonium ‘Zwartkop’, and the lower-growing Aeonium ‘Caitlin’ in the foregrounds. Both have burgundy and green from elsewhere in the beds. For a stronger leaf structure than the grasses, I put in some Euphorbia ‘Ascot Rainbow’, which will have rosy pink tips. Lastly, I spread about many individuals of the succulent Graptoveria ‘Fred Ives’ to repeat the pinks, but also provide another soft grey base to enhance the fescue grasses.

AFTER: The camellia’s skirt has been lifted.

AFTER: Aeoniums along the back provide a frame for the grasses and succulents up front.

AFTER: Silky net bush in the corner.

AFTER: Euphorbia and graptoveria and aeonium. Oh, my!

AFTER: Fescues and succulents under the vines.

We made some minor repairs to an existing drip irrigation setup with micro-sprayers, and set it to go off minimally every other day. That should be quite sufficient for everything. I’m pleased with the outcome, and hope to get a chance to watch this one grow in!