Last spring a friend asked for some advice about what to do with “a couple of bushes” in front of his house. They were large and dense, and created a bit of a visual block – a safety hazard, actually – as they’d back out of their driveway. Based on his description (“I dunno, regular bushes”) and his home’s location south of SF in the city of South San Francisco (dominated by midcentury tracts), I assumed he was talking about junipers. I told him to bring photos and I’d give some suggestions.

Turns out I was right about them being junipers. Large, dense hassocks of juniper. And a couple of hassocks of Japanese cypress thrown in for good measure. And two sad, neglected roses. And white sparkly gravel that had long since lost its sparkle. And the yard and concrete path framed in scalloped pink brick edging. And each plant in its own little circle of scalloped pink brick. And everything planted symmetrically in pairs, but not really; they were all a little “off” from actual symmetry. It’s like it wanted to be kitsch, but didn’t know kitsch was a thing.

My advise? Napalm. Flame throwers. Bulldozers. Whatever it took to get that vision out of my eyes where it’s forever burned.

The more diplomatic side of myself told him that really it would be a matter of shortening the bushes so that he could see over. Or, if he wanted, he could always go all topiary on them critters.

Well, that got him excited, and he started taking pictures of all the topiaries around his neighborhood. “You mean like this?! I like this!” And the next week, “Ooh, look at this one!” Then the question that every gardener dreads (and anticipates) when they know they don’t really wanna do it, especially when you know it’s going to be work for trade of a meal. “Would you do it for me? You just do the pruning and I’ll do the cleanup?”

Dammit. I knew I would say yes, dammit. At first it was a softer entrance: “Well, why don’t I come over and take a look and see in person what the possibilities are.”

So I did. Since this was essentially a freebie job, he suggested quite sincerely that I do whatever was the easiest. Well, of course that would be lopping off the top halves of the junipers, leaving them like giant green bowls full of dead brown matter. Oh, but no. “Let’s do it! I’m going to do puffball poodle-tail topiary on these. It’ll be fun!” I said. It’ll be fun. Did I really just say that?

That was 9am. His wife made me a lovely breakfast, and a lovelier lunch, and I plugged away. The difficult part was just getting started, finding where the individual branches came out. I’d try wiggling it to see if there were obvious masses alluding to branches, and start cutting my way in. By 430pm, I was only perhaps 75% into the first of the two bushes, when it was time to call it quits for the day.

In a way, it really was kinda fun. It was archaeology. Those things had been planted in the 1960s when the house was built, and had been kept as hassocks the whole time. The previous tenants apparently had lots of frat-style front yard parties, and the bushes were full of cans and bottles of all sorts. We found tools and cheap jewelry. We found a baseball bat. At the bottom, we even found “vintage” Budweiser cans – the old kind that had the opening where you pull off the tab and drop it into the can so that you could accidentally choke on it later.

I’m a big fan of Crimes Against Horticulture, and follow the blog and Facebook page religiously. I’ve even submitted many photos of crimes I’ve happened across. A big part of me was embarrassed by what I was doing to these junipers, secretly knowing that I was doing something worthy of its venerable pages, but another part of me was having a good time hacking away. It was pleasing to reach that central trunk and decide which branches should live and which should die the death they deserved. As the forms started taking shape, I really came to be pleased with my handiwork. It’s just the classic poodle-tail pruning job, but it’s gratifying to start it from scratch, and on plants that are large enough to give me that before-and-after I love so much.

What I’d planned as “a short day” in fact took three full days, split over six weeks as time allowed. Three breakfasts and three lunches, and lots of work. Lots of rashes on my hands from the juvenile growth on the junipers. In the end, they’re a little bit of a hack, since the balls haven’t fully formed, but it’ll recover quickly and become the ultimately desired form soon enough. Gotta start somewhere! 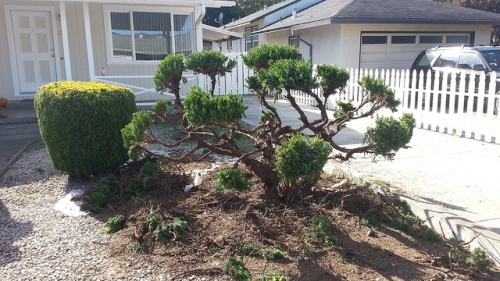 Since the larger junipers up front now have some form and structure, the smaller hassocks of Japanese cypress are much less offensive behind them. It’s no longer just a “plunk plunk plunk plunk” of plants. There’s something of a design at play.

When I left, the pruning had been done but the piles of branches and dead leaf matter were still stacked up, awaiting the green bin and shop vac. Hopefully I’ll get a chance to see them all prettied up!

Here’s the link for the full Flickr album: https://flic.kr/s/aHsk3VtGat