Last summer I was contacted through the BoZannical Gardens Facebook page with a request to do a design of my own. What a thrill! I love doing garden installations of all flavors, but it’s especially exciting to be called upon to do my own design.

I met the clients at their home on the rim of Glen Canyon here in San Francisco to scope out the proposed garden areas and get an idea of what they were wanting done. The house is a completely new construction, and the owners (admirably) chose it because they did not want to be part of the rampant eviction-for-condo-conversion phenomenon that is sweeping The City these days, and nobody had been displaced for this house to exist. That’s rare for such a densely-built city. The contractors had planted an innocuous and benign “to be expected” selection of plants in front of the house, and the homeowners (the lady of the house, in particular) wanted to put in something more suited to their own personal taste. She is very into gardening herself, but with a newborn in hand really needed the help getting something started.

I didn’t know this at the time, but she had actually sought out several bids from other design firms and landscapers prior to me, but wasn’t feeling connected to the plant offerings. When she saw what I do, her first thought was, “Oh, now he’ll do something unique!” And so I did. 🙂

Coming up with a design idea and plant list was exciting. I mean, it really just flowed for this one. As soon as I saw the house, I immediately knew the first three or four plants I wanted to use: some specimen tree aloes (Aloe barberae, syn. A. bainesii), Big Bend yucca (Yucca rostrata), and a huge fuzzy Kalanchoe beharensis. In our discussion, she had wanted lots of color in front of the house – pinks, oranges, purples. My mind went to work and I pulled together an awesome combination of plants. As a buyer at Flora Grubb Gardens I have access to whatever I want to get, and the ability to peruse grower availability lists for inspiration. The big moment was emailing the list to her and having her respond immediately with, “A few of those names are familiar. I trust your judgement completely.” Magic to my ears!

The main focus for me, besides color and texture, was drought tolerance. In fact, I decided to go with a xeric garden, meaning “very dry.” The new garden can survive beautifully with no watering necessary, though a few of the plants will look better year-round if they get some summer watering. Aeonium, for example, is a summer-deciduous plant that will reduce its foliage in the dry season to retain water, and grows in the winter and spring when it’s raining. I wrote about that a couple years ago, incidentally. In our Mediterranean climate, we have winters that are cool and wet, and summers that are dry. Some parts of town get lots of fog in summertime, and it’s significant enough to give many plants all the water they need. This particular part of town, though, is drier than many other areas. The orientation of this planting is south-facing, sunny, and windy, so I did retain a portion of the irrigation system to keep a few plants on drip for the time being. In a year, it should be possible to “unplug” and let the plants take it on their own. At least in this front garden.

(Some “BEFORE” shots, as work began, showing how everything had grown…)

The “contractor garden” that was there already was fairly par for the course. A red plum tree (Prunus cerasifera ‘Atropurpurea’). Two groups of three purple hopseed bushes (Dodonaea viscosa ‘Purpurea’). Purple fountain grass (Pennisetum setaceum ‘Rubrum’). Blue fescue (Festuca glauca ‘Elijah Blue’). And the ubiquitous and dubious Mexican feather grass (Stipa/Nassella tenuissima) that has no business being planted upwind from an open space with significant native plant habitat. It was amazing to look at a Google Street View image of the house and see the original planting a mere six months prior. The hopseeds had tripled in size in that time, as had the grasses!

My assistant for the project, John, and I removed every last one of the contractor plants, and did the best we could to rake up all the feather grass seeds. There will be seedlings to watch out for after the rainy seasons for awhile, no doubt, but with persistent yanking they’ll eventually go away. Hidden inside the grasses were three lovely rocks, positioned beautifully. Those stayed.

It was a fun planting project. The streetside garden is highly visible, being right at the right-angle turn of a busy neighborhood route connecting the Sunnyside with Glen Park. It’s a narrow street where only one car at a time can pass through, so people have to take turns pulling aside to let each other pass. At this particular crook in the road, people driving in both directions have to slow to 5 mph to make the turn, and the garden is right smack in front of them to admire. We had lots of people stopping to ask what certain plants were. We had neighbors walking up from several nearby houses to watch what was going on. We had some disbelief that we had removed a “perfectly fine” garden. But mostly we had people excited to see something so colorful and exotic going in. I love how gardens bring neighbors together!

The end result is a myriad of succulent plants and extremely drought-tolerant ones. Besides the huge tree aloes, the biggest excitement for me was that my coworker Jason Dewees, the Palm Broker, horticulturist, and liaison for Flora Grubb’s own growing grounds in the San Diego area, was able to track down for me that specimen-quality Yucca rostrata (planted behind the rocks) with a decent bit of height to it already. I had a great time with form and color. I repeated shapes in different colors. I repeated textures in different colors. I repeated colors in different forms and heights. The key was keeping within a color palette of tertiary complements (blue, green, pink, orange, purple) and repeating it in various textures and shapes. At the far end of the garden I used Grevillea ‘Long John’, which will provide some height and will screen off a side area through a gap between the houses. That area may be a future project for the client: a Japanese-style garden to provide a better view for the neighbors, whose view of the canyon was blocked when this house went up. The Australian grevillea has an appearance similar to pines, but with red hooked flowers that attract hummingbirds. It makes a perfect transition from succulents to softer Japanese style! 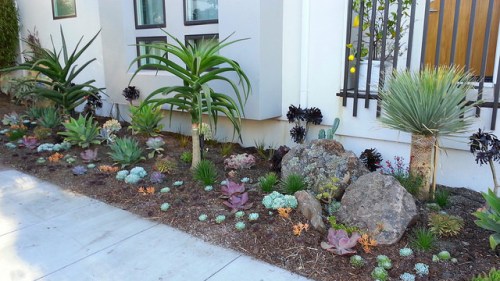 I’m more than thrilled with a relatively large design and installation all my own. Here’s to more opportunities like this!

One response to “boZannical Design + Installation: A Xeric Garden in Glen Canyon”