Around these parts you hear a lot about invasive species and the “Nativism” movement (eradicating introduced species of plants and replacing them with California native species.) This sort of thing is currently being done around the region with Australian eucalyptus trees being removed and replaced with Scrub Community plants like Coyote Bush (Baccharis pilularis), manzanitas, and oaks.

This begs the question: What does it mean to be an invasive species? The environmentalist in me has generally sided with nativism, but being open to educating myself really leaves more questions than answers on that front. For example, those eucalyptus have been a part of the California landscape for well over a hundred years now, planted after the Gold Rush by settlers to provide fast-growing lumber for the growing railroads. Turned out to be bad wood for the purpose, and here we are with massive forests of the stuff. But, it has also developed an ecosystem of its own, and removing it now destroys the developing ecosystem. But to replace it puts back plants that benefit native insects and fauna. So which is the right path? 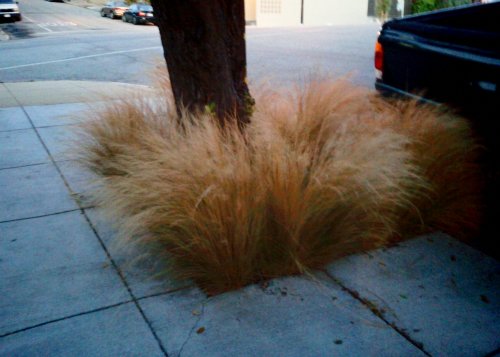 Good question, and I’m not firmly rooted in either answer as the only correct option. A good friend of mine points out that we – humans – are ourselves part of the environment, so is our relocating of plants to suit our needs not an intrinsic part of nature by default? Hmm. Point taken. Food for thought. As I go on with my studies (looking forward to the new Environmental Geology department at City College this semester!) I have to keep questions like that in mind as my opinions form. Primarily, though, I seek to share knowledge of how a plant spreads, and the implications of that. Right or wrong, being informed is key.

Let’s take a particular plant of note on the Invasive Species List for our area: Mexican feather grass (formerly Stipa tenuissima, now being called Nasellia tenuissima). Here’s a case study on my own observations. First off, it’s a damn gorgeous grass. I totally get it why people love this stuff. Gorgeous clumps two feet high and wide, of blonde feathery leaves that blow in the wind. Planted en masse, it can look like a churning golden sea. Mmm. Seriously mmm.

Up the hill from my house is this beautiful mass of the grass planted around a street tree. Boy, that’s pretty. On close inspection, all that feathery goodness is from the seed heads, like with wheat and foxtails and pretty much all grasses. The fact of this being beautiful in the wind also highlights the fact that those seed heads blow away. That’s how it works with grasses – the wind helps a grass spread to anywhere it can take root. So here we are in a concrete city. What’s so invasive about this grass here?

Seedlings a few feet away… 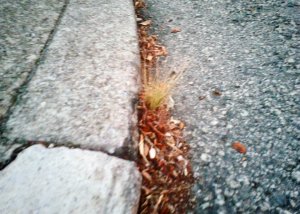 …and yet again a few feet further.

The afternoon winds here are strong and come in from the sea to the west of town. Consistently and persistently, almost every day of the year in the afternoons. Take a couple of paces eastward from this grass planting, and you’ll notice little seedlings popping up in cracks in the sidewalk and gutter. So what? How much harm can a sidewalk weed do? Cross the street to the east, and here are more. And more. And more. This particular homeowner does not seem to care about sidewalk weeds, so they grow. Go further down the hill to an open hillside garden and there is more that settled, was appreciated by the gardener, and was allowed to flourish. If it gets ignored or appreciated, it grows and reseeds – plain and simple.

More has seeded across the street.

And check out this growing colony.

Eventually, these seedlings make their way elsewhere, out into open landscape. Perhaps they land near a stream and choke out other plants along the edge. Perhaps they land in a field and become a field of this one grass. Ironically, though, the golden grassy hills we all see here in summer are that color from other invasive species we’ve been living with for a few hundred years. When the Spanish settlers came they brought cattle, and grasses from home to feed the cattle. Boom. Done. California’s golden hills are completely invasive species. Does letting the feather grass loose do anything different than what has already been done? Hmm. For that matter, the pre-European landscape was far from “natural”, in fact being managed by the indigenous peoples for millennia through annual burning. It’s hard to know what “natural” landscape you are trying to return an area to, when it comes down to it.

Still further east, this homeowner is letting the seedlings grow.

The hillside garden down Noe, where the seedlings are being allowed to grow. (Isn’t that a fantastic aloe?!?)

So again, I have more questions than answers, but it’s interesting to observe first-hand how the process happens, to see it in action. Personally, I avoid using this plant because of its ability to so easily spread. Destroying one thing always leaves room for another. It’s change, but does that automatically mean it is bad? Food for thought.

What’s your take on it? I’d love to hear some opinions.

2 responses to “We’re Being Invaded!”